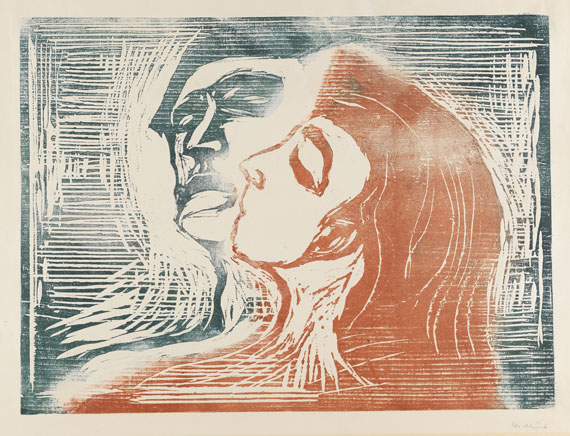 Essay
After the outbreak of World War I in 1914 Edvard Munch took his printing blocks with him to Norway. Our print presumably originates from these days. He differs from earlier versions as far as the coloring of the woman's head is concerned, as well as the hair, which now goes all the way down to the lower margin of the image. As it was the case with many of his works, Edvard Munch picked the conflictual relationship between man and woman as central theme of this woodcut. Even if he does not address the issue openly, the illustration still suggests that Munch doubts the harmonious relation of man and woman. Like no other visual artist in these days he was able to demonstrate a strange mixture of feelings of passion and rejection, shaping his generation's idea of man with the individual becoming more and more independent. Edvard Munch's people are children of a society that is at its own brink, acting in a world between reality and an unfulfilled longing, on a quest for the meaning of life.
More Information
+
Sell
Would you like to sell a similar object?
+
Register for
Edvard Munch
+
Buying from A-Z
+
Contact a specialist
+
Edvard Munch Biography
Share