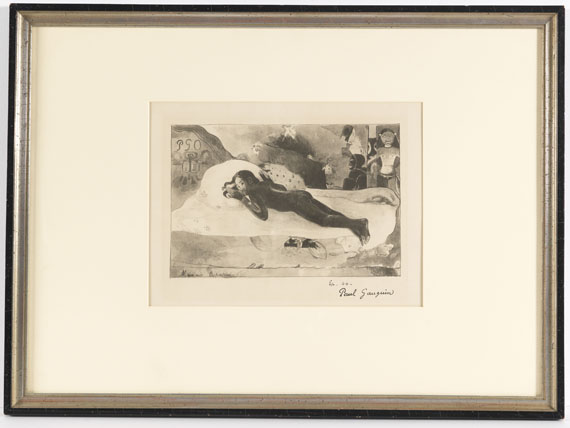 In April 1891 Paul Gauguin embarked on his first journey to the South Seas and he stayed on Tahiti for the following two years. During these artistically fruitful years he made some of his masterworks. For financial reasons he had to return to France in 1893. However, the solo show at Galerie Durand-Ruel in Paris the same year was much praised by both critics and the representatives of the young generation of artists. In autumn 1893 Gauguin, together with the writer Charles Morice, began to write a book about his life, his adventures and the experience gained in Tahiti. He made ten woodcuts for the book, each intended as an illustration for a chapter in "Noa Noa", which was the book's title. Between winter 1893/94 and spring 1895 he made several graphic works of similar themes, among them the lithograph"Manao Tupapau". The reclined Maori girl first appeared in 1892 and became a recurrent motif in various variations in Gauguin's work. It counts among his most important themes. The painter described the new motif of a scared girl afraid of the ghosts of the dead from the Pacific legends in a letter to his wife Mette. A watercolor on one page in a letter from 1892, as well as the oil painting with the same title which he had made on Tahiti (today in the Albright-Knox Art Gallery in Buffalo) are presumably the earliest works on this theme. In late 1893 a woodcut for the series "Noa Noa" followed, this lithograph offered here came a little later. Additionally, further sketches and a watercolor study are also in existence. How important this theme must have been to Gauguin is shown by the fact that he even referenced his own painting "Manao Tupapau" in the background of a self portrait from 1893 (today in the Musée d'Orsay, Paris).
More Information
+
Sell
Get a free appraisal for a similar object!
+
Register for
Paul Gauguin
+
Buying from A-Z
+
Contact a specialist
+
Paul Gauguin Biography
Share