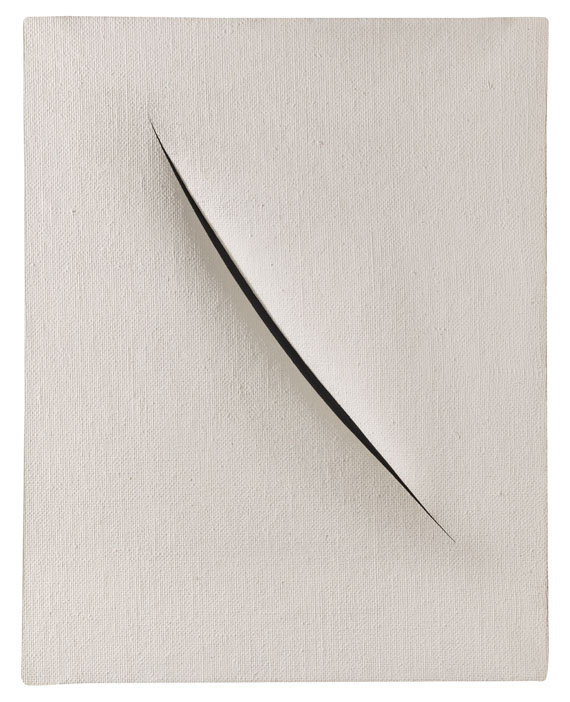 In 1958 Fontana began to apply his famous slashes to the canvas, he dared the seemingly brute destruction of the mostly monochrome canvasses by means of sharp razor cuts. These highly acclaimed creations by Fontana, among which this early 'Concetto spaziale' also counts, would henceforth make history. Today they are among the highlights of renowned collections, such as the Peggy Guggenheim Collection, Venice, the MoMA, New York, the Neue Nationalgalerie Berlin and the Pinakothek der Moderne, Munich. 'My art is entirely characterized by this purity, by the philosophy of nothingness, which is not the nothingness of destruction but the nothingness of creation [.] And the very slash[.] was not intended as a means of destruction of the image, on contrary, it served as a means to explore what lies beyond it' (quote after: Bettina Ruhrberg, Kritisches Lexikon der Gegenwartskunst, Munich 1993, p. 3). Through the gasping cut into the monochrome, almost pure white canvas of our work, Fontana breaks the constraints into the depth of his painting. The impression of spatial extension does not only occur in the marginal areas of our work, but also in the opened canvas, through which the viewer's eye explores the mysterious depth of the seemingly infinite space, making it a meditative space, which, as Fontana's added phrase 'attesa' hints at, can be expected.
More Information
+
Sell
Get a free appraisal for a similar object!
+
Register for
Lucio Fontana
+
Buying from A-Z
+
Contact a specialist
+
Lucio Fontana Biography
Share