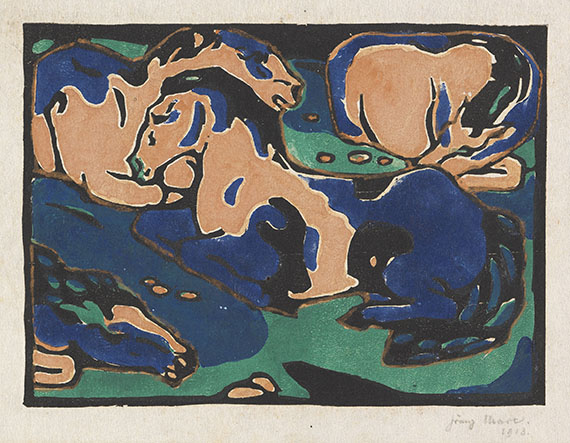 PROVENANCE: Private ownership Southern Germany (present from the artist to the grandfather of today's owner).

Essay
This copy of one of the most important color woodcuts in the graphic creation of Franz Marc shows different colors than the other known copies. The artists of Expressionism are well-known for their experiments, especially as far as graphic art was concerned, with which they realized unusual results. This did not only apply to the paper they used, often low-quality types such as packing paper, they also varied the sequencing of the printing plates for their color graphics, in order to achieve different effects. Even though the graphic artists of Art Nouveau had already been occupied with special color combinations, the artists of Expressionism were far more adventurous. The basic tenor of our sheet, which is based on blue and green on the known copies from the small edition, is increased by two shades of ochre that cover the woodcut's blank spaces. This alteration adds an almost abstract notion to the scene. What makes this version so attractive is the unusual expression that is based on the experimental integration of another color.
More Information
+
Sell
Would you like to sell a similar object?
+
Register for
Franz Marc
+
Buying from A-Z
+
Contact a specialist
+
Franz Marc Biography
Share