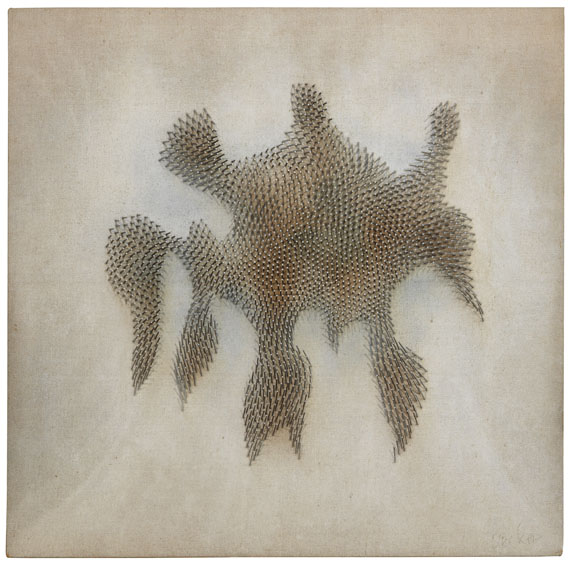 The early large-size nail pictures by Uecker are among the artist's most sought-after works on the international auction market.

The nail as an anonymous, industrially made product is a medium for an intensive spiritual expression in Uecker's oeuvre. The nail is traditionally associated with concepts of holding on and fixating, however, in his nail pictures Uecker uses the material to illustrate motion. In this "Hommage à Paul Scheerbart" light and shade enliven the image surface with the whirls of huddled nails and create a rhythmical dynamic that changes with the observer's position. Paul Carl Wilhelm Scheerbart (1863-1915), to whom Uecker dedicated this early nail work, was one of the most important figures in German fantasy literature. Scheerbart's short stories and novels, like his "Lesabéndio. Ein Asteroiden-Roman" from 1913, usually play on remote planets without any earthly realities and take the reader to a fantastic counter-world with mythical creatures. Uecker's work pays tribute to the literary visionary and eccentric, who was part of various artist circles in Berlin without following any tendency in literature, in form of a seemingly weightless amorphic nail being that elusively hovers across the canvas. Indeed, Scheerbart's stylistic independence and progressiveness made for Uecker's decisive twist of identification and inspiration for this large-format work.
More Information
+
Sell
Get a free appraisal for a similar object!
+
Register for
Günther Uecker
+
Buying from A-Z
+
Contact a specialist
+
Günther Uecker Biography
Share