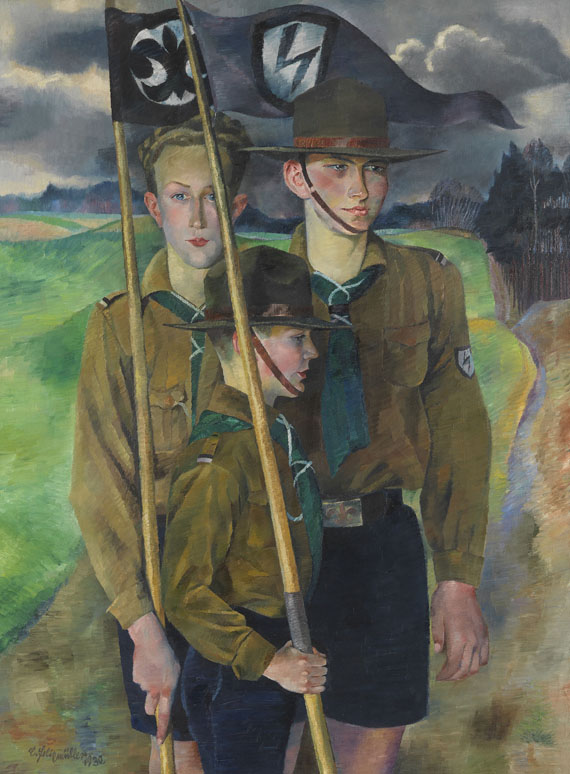 Presentation of an unusual subject as classic triple portrait in the open.

PROVENANCE: From artist's estate (since in family possession).

Essay
The family, both the inner as well as the wider circle, was a preferred theme of Conrad Felixmüller. He dedicated a large part of his artistic creation to this subject area in this case to his son Luca born in 1918. The young boys parading like soldiers, suggest through their strict self discipline how easy it is to subordinate a young generation to formative powers. The dark sky in the background may hint at the great political confusion in those days, however, in his interpretation Felixmüller does not hesitate to show this youth's clear willingness to be open for new ideals. All the pretended soldierly sincerity in their faces is covered up by a certain lyricism. A uniformed youth at a stage of early military training aimed at obedience and loyalty should lead to one of mankind's biggest mistakes. But it's not the case yet. Felixmüller illustrates the boys who submissively stand to attention at a dangerous stage between hope and fear as bright and clever. From today's perspective the subject of this composition may appear a bit strange at first sight, but it is an expression of a time and a society on a quest for stability and self-conception.
More Information
+
Sell
Would you like to sell a similar object?
+
Register for
Conrad Felixmüller
+
Buying from A-Z
+
Contact a specialist
+
Conrad Felixmüller Biography
Share