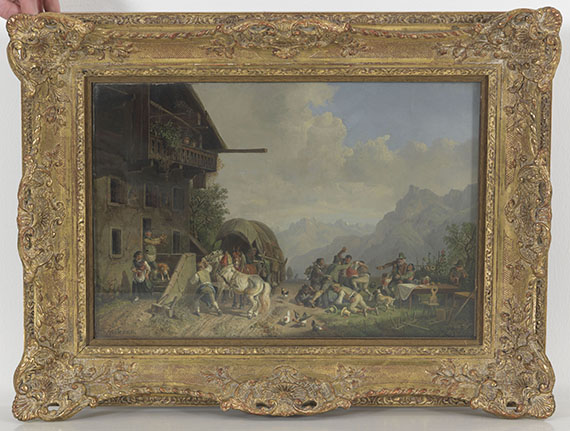 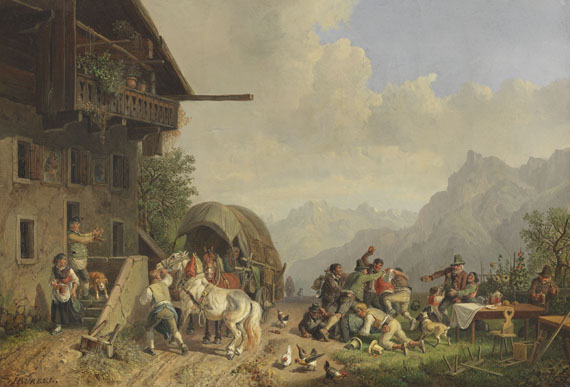 The "Rauferei vor der Bergschänke" (Brawl at the Mountain Inn) was made in the mid 1850s and is a great document of Bürkel's mastery at the peak of his artistic creation. The motif is recurrent in his oeuvre (cf. catalog raisonné Bühler/Krückl 155-166) and is also part of a larger work complex. Bürkel repeated the basic motif of the mountain inn many times, however, he always combined it with new and individual elements like hunting scenes, parties, shooting matches, hoof smiths, council meetings or this very popular humorist motif of the brawl. With every new painting the artist also varied the arrangement of his numerous figures and animals, as well as the background landscape. The inn, however, is usually in left or right of the image, the group of persons can usually be found in the center, just as it is the case here with the brawling men. The arriving carriage in front of the inn, the roused chicken and the chairs and table knocked over in the brawl enliven the scene. The tor Alps in the background with mighty cumulus clouds above them tower over the scene.
More Information
+
Sell
Get a free appraisal for a similar object!
+
Register for
Heinrich Bürkel
+
Buying from A-Z
+
Contact a specialist
+
Heinrich Bürkel Biography
Share