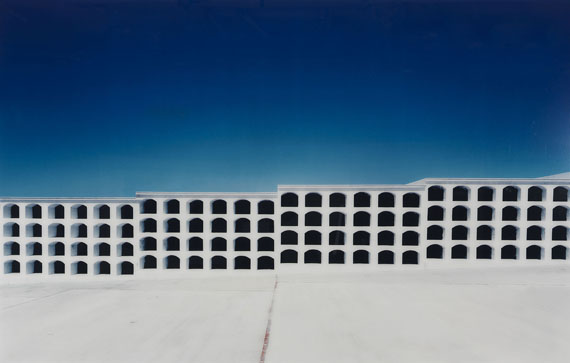 Andreas Gursky studies Visual Communication at the Essen Folkwangschule from 1978-81 and photography at the Kunstakademie Düsseldorf from 1981-87 with Bernhard Becher, among others. At first the principle of the sequential dominates his work. The photographs that are made at this time are characterized by a tendency to explore the single picture and to select highly individual motifs. Small-scale photos are made in which Gursky pursues the relationship between man and his environment. The artist holds his first one-man exhibition at Düsseldorf airport. Two years later he receives the '1st German Photography Award' in Esslingen. In the next few years he is awarded the 'Bremen Art Award' and the 'Renata Award' by the Nuremberg Kunsthalle. In 1991/92 he develops works for the 'Siemens Photo Project' that are concerned with the interiors of large-scale industrial production sites. Shortly afterwards, in 1994, the Hamburg Deichtorhallen devote a large one-man exhibition to Gursky. Others follow in Wolfsburg, Düsseldorf and Winterthur. An 'Andreas Gursky - Retrospective' opens in 2001 at the Museum of Modern Art, which can also be seen in the Centre National d'Art et de Culture Georges Pompidou in Paris as well as in four other cities.

Color becomes increasingly important in his more recent works, so that the arrangement of the individual pictorial elements takes on greater significance. Gursky's photographs are influenced by various motives and genres from art and photographic history; for Gursky, however, the main focus of his analysis remains centred on pictorial language.