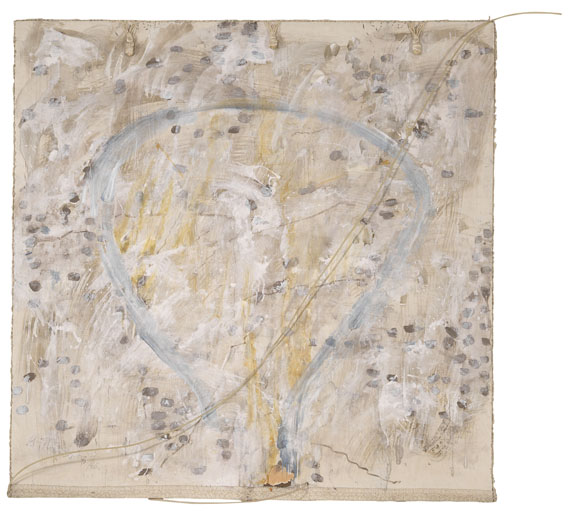 Essay
The artist's purely painted early work was followed, in the 1960s, by an analysis of three-dimensionality in the combination of painted surfaces and three-dimensional elements. From 1964 he designed increasingly three dimensional objects, which integrated apart from the classic canvas base et al. wood, gauze and nylon strings. The very same year Hoehme discovered his 'pattern sheets', from 1968 on followed by installations and the first 'Damast Pictures', works which were Hoehme's answer to the 'open picture'. Hoehme published the manifesto 'Relationen', which was valid for his work in 1968. Gerhard Hoehme is one of the most important painters of German Informel. His work has been much honoured in the past and today by numerous exhibitions, such as at the Museum am Ostwall, Düsseldorf in 1980, or at the Städtische Kunsthalle Mannheim and the Sprengel Museum Hannover in 1985/86. Most recently, his works were on show at the Kunstmuseum in Bonn in 1998 and at the Kunsthalle Düsseldorf in 2000.
More Information
+
Sell
Would you like to sell a similar object?
+
Register for
Gerhard Hoehme
+
Buying from A-Z
+
Contact a specialist
+
Gerhard Hoehme Biography
Share