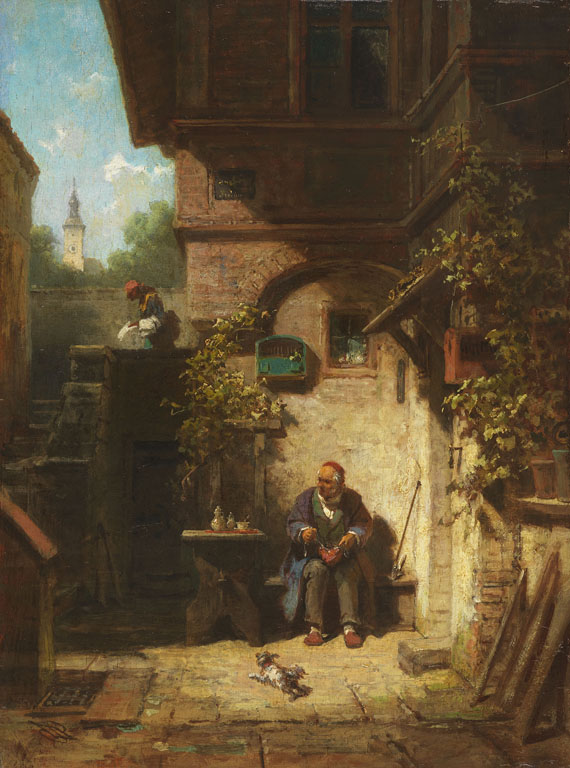 PROVENANCE: According to his sales list from December 1880, Spitzweg sold this painting with the title "Zeitungsträgerin" (no. 415) to the Munich art dealer H. Ludwig Schmederer, along with the works "Festungskommandant" and "Kleine Stadt mit Schlagbaum" (sales list 414 and 416).
Galerie Heinemann, Munich, gallery no. 18997 (acquired from Schmederer on 27 October, 1933 erworben, salo on 28 October 1933, with copy of gallery's documents).
Sonce in possession of a Lower Franconian private collection.

Carl Spitzweg (also Karl Spitzweg) was born on 5 February, 1808, in Unterpfaffenhofen, Bavaria. He finished his education at the humanistic Gymnasium in 1825. He then studied pharmacy at the university in Munich. In 1832, Spitzweg completed his studies with distinction. Because of a long period of illness, he gave up his career and dedicated himself to painting from then on, painting copies od works in the Alte Pinakothek in Munich. He also maintained friendships with painters such as Christian Morgenstern, Eduard Schleich the Elder, Dietrich Langko, and Friedrich Voltz. In 1835, he became a member of the Art Association of Munich.

Two years later, he sold his first paintings. Spitzweg found inspiration during his many educational journeys to places such as Salzburg, Bozen, Meran, Venice and Dalmatia. Spitzweg started a life long friendship with Moritz von Schwind in 1847. He and Schwind visited the World Fair in Paris together in 1851. While visiting London in that year, he was fascinated by the works of John Constable and William Turner. Around 1860, he started seeing some success. In 1865, Spitzweg received the Bavarian Royal Merit Order of St. Michael. In 1868, he was inducted as an honorary member of the Academy of Visual Arts, though he had never attended an art academy himself. He produced many humoristic pictures in the "Fliegende Blätter" beginning in 1844. In these small format works, he represented the world of the German everyman with loving humor and indulgence as the Biedermeier ideal of "the good ole days." "Der arme Poet" ("The Poor Poet") from 1839 best represents his technical sophistication and unmistakable style. Carl Spitzweg died on September 23, 1885, in Munich. [CB].