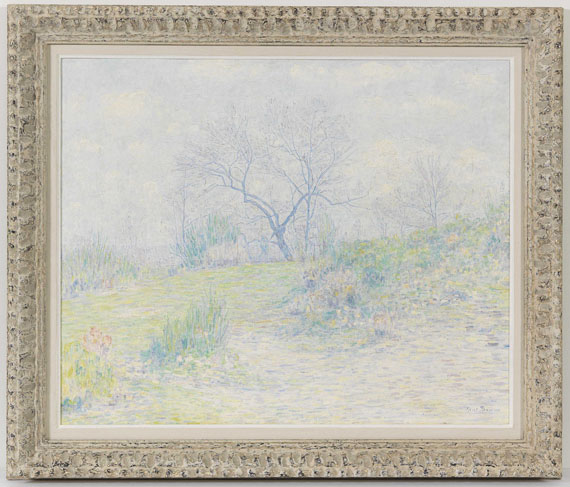 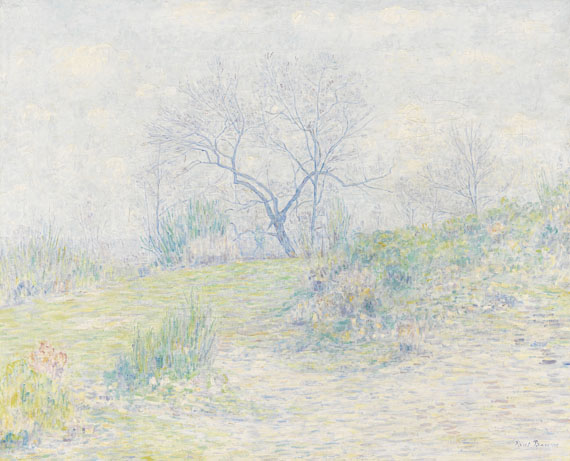 Paul Baum spent his youth in Meißen, where he began an apprenticeship as a flower painter at the porcelain manufacture at the age of 17. A leave of absence for the purpose of visiting the Dresden Kunstakademie resulted in his decision, in 1878, to abandon his apprenticeship and continue his studies in Weimar. Until 1878, as a student, he spent the summer months travelling to northern Germany, Holland and Flanders. Baum returned to Dresden after finishing his studies and joined Friedrich Preller the younger as a pupil. He joined the Dachau painter colony in 1888 and worked in Allach near Munich. During a trip to Paris in March 1890 Baum saw works by the Impressionists Monet, Pissarro and Sisley. He left Dachau in July of the same year and settled in Knokke sur mer, the summer camp of the Impressionists. He lived here for four years after which he returned to Dresden as a member of the "Dresdener Sezession". Baum moved to the tiny village St. Anna ter Muiden near Sluis close to the Belgian-Dutch border in 1895. He continued living here, with several interruptions - various travels through Europe and lengthy sojourns in Berlin -, until 1914. After the beginning of the war Baum first moved back to Dresden where he was appointed professor at the Akademie. He spent a brief period in the painters' village Willingshausen in 1915 and then moved to Neustadt near Marburg. When Carl Bantzer, whom Baum knew since 1878, was appointed professor at the Kunstakademie in Kassel in 1918, Baum joined him and taught landscape painting. He bought a house in Marburg in 1921 which was to become his permanent domicile, even though the painter spent much time elsewhere. From 1924 he spent most of his time in San Gimignano and only occasionally travelled to Marburg.

He was awarded an honorary doctorate by the university of Marburg in 1927. The academic senate of the Kunsthochschule Dresden appointed him an honorary member on his 70th Birthday. In the mean time Baum had moved to the remote village St. Lucia near San Gimignano, where he died from pneumonia in 1932. While Baum's early works are influenced by the plein-air painting of the School of Barbizon, his work after 1890, with its lighter palette and the use of comma-like brushstrokes, is more associated with the French Impressionists. In 1900 Paul Baum developed his own version of neo-impressionism and became one of the most important artists of this style in Germany.