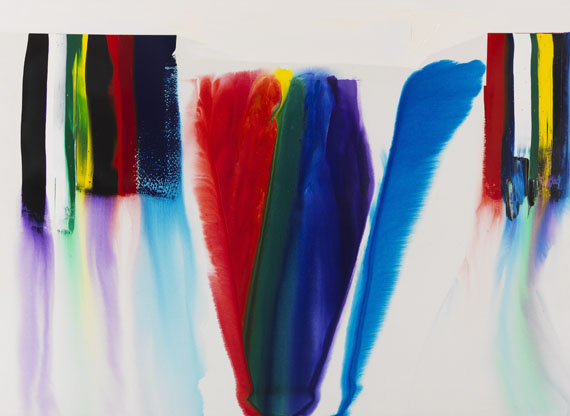 Paul Jenkins was born in Kansas City, Missouri, on 12 July 1923. Between 1937 and 1942 Jenkins studied at the Kansas City Art Institute, where he experimented with ceramics and became enthralled with Asian art. After serving in the US army from 1943 until 1945, Jenkins resumed his art studies, this time at the Art Students League in New York. He absorbed the influences radiating from that rich art world, meeting such luminaries as Mark Rothko, Jackson Pollock and Barnett Newman, and immersed himself in Gurdjieff's esoteric and occult philosophy that was so popular with artists and intellectuals at the time. In 1951 Jenkins painted his first picture with dripping dilute paint. Jenkins went to Europe in 1951, spending quite some time in Italy, Spain and Paris. New impressions, especially the use of a vibrant palette, are reflected in the work Jenkins did then, which, as drip and splash paintings, represented Action painting. Although he retained his Paris studio, Jenkins returned to America in 1955 and began to show work at exhibitions. In the mid-1960s Jenkins spent some time in Japan, India and even Russia. During the latter half of the decade, Jenkins' paintings came to be dominated by white and shades of grey. Jenkins used the 1970s to paint watercolors and work on sculpture projects, which were cast in bronze. The biggest of these, 'Mandala Meditation Sundial', took years to complete.

In 1979 Paul Jenkins first began to apply layers of pastose paint to his canvases although he had previously only glazed them with a whisper-thin wash of pigment. The group of works called 'Anatomy of a Cloud', which unites collage, paintings and bronzes from the 1970s, reveals the range of which Paul Jenkins' was capable by the early 1980s. It was published as a book in 1983. The late 1980s saw Jenkins receive commissions for grand public works throughout the world, do a play and produce a number of lithographs. The pure colors of the spectrum have determined all Jenkins' experiments with colors down through the years. On his extensive travels Jenkins has always been fascinated with the distinctive colors of any place he happens to be. During the 1990s Jenkins continued to show work actively, especially in France and the US. In the new millennium Jenkins is still at it, travelling tirelessly and commuting between New York and Paris to work.