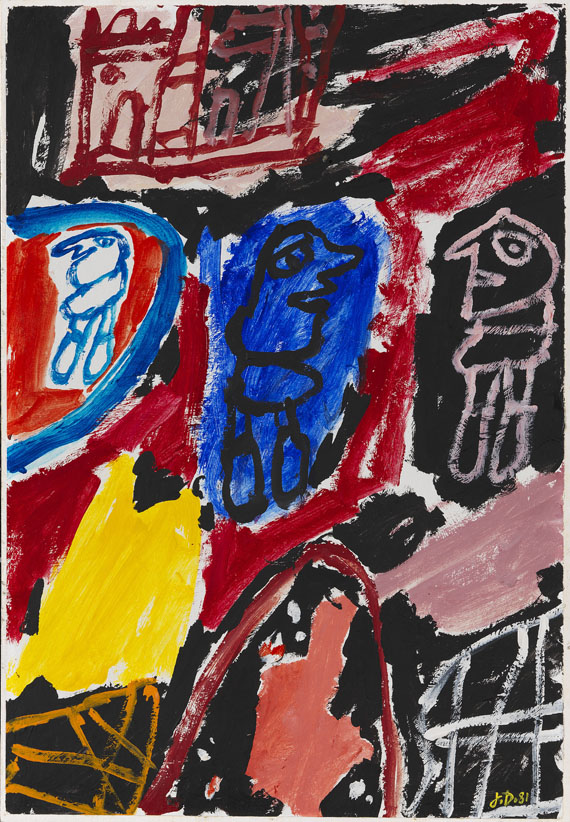 Expressive work from the important series of the "Psycho-sites", which are rare on the German auction market.

Jean Dubuffet was already interested in fine arts during his schooldays, so that a trip to Paris in 1918 was combined with the intention to become a painter. Dubuffet attended painting courses at the Académie Julian for six months, but then abandoned painting. After a trip to Italy and his military service Dubuffet returned to Le Havre and initially worked in the wine trade again. When he resumed painting in 1933 it was once again only temporary. The final decision to devote himself exclusively to painting was made in 1942. Deeply impressed by the genuine forms of expression of mentally handicapped children, which were totally free of visual thinking, and the ways of life of primitive people, Dubuffet followed the Surrealists in their rejection of the aesthetic and moral concepts of western civilisation. The realisation of his own dream instead of conforming to society within a 'cultural' order made Dubuffet a consistent loner. A tendency to take high risks, openness and a high mental capacity were expressed in his high adaptability: achievements were abandoned over and over again in order to create new things. Thus, his work includes the archetypal figures of the 1940s as well as the impetuous outburst of gestural brushstrokes in his last paintings; the diversity of content having its formal counterpart in the usage and combination of various materials.

Our expressive work was made on 6 April, 1981 and is therefore part of a series of works from the years 1981 and 1982, grouped under the key word "Psycho-Sites". The works, initially executed in this format and later in a slightly larger dimensions, are all occupied with the same theme: man in space. What is so special about them is the continuous repetition of the motif, just varied by the number of small figures that inhibit an image space that is not clearly defined. Dubuffet never stages his figures alone in his pictures, however, the individual's isolation can clearly be felt, as every being is enclosed by its own color bubble. Delivering a slight hint only, the artist leaves the scene's interpretation to the observer. Despite their similarity they possess a wonderful individual fascination. The artistic consistency with which Dubuffet created his own image world, is also quite impressive.

Until his death in 1985 Jean Dubuffet's work could be seen at a retrospective in Paris, Hanover and Zurich and many international exhibitions. Over the past years exhibitions in the Collection de l´Art Brut, Lausanne (2005), the Staatliche Kunsthalle Karlsruhe (2005), the Palm Springs Art Museum (2006) or the Hypo-Kunsthalle in Munich (2009) have shown Dubuffet's both multi-faceted as well as impressive work.