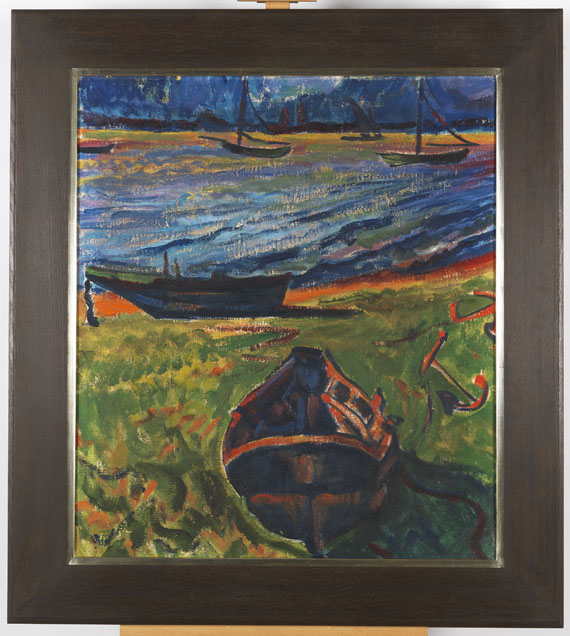 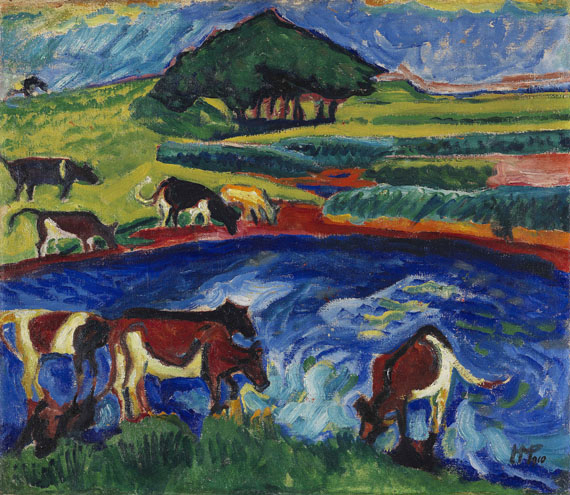 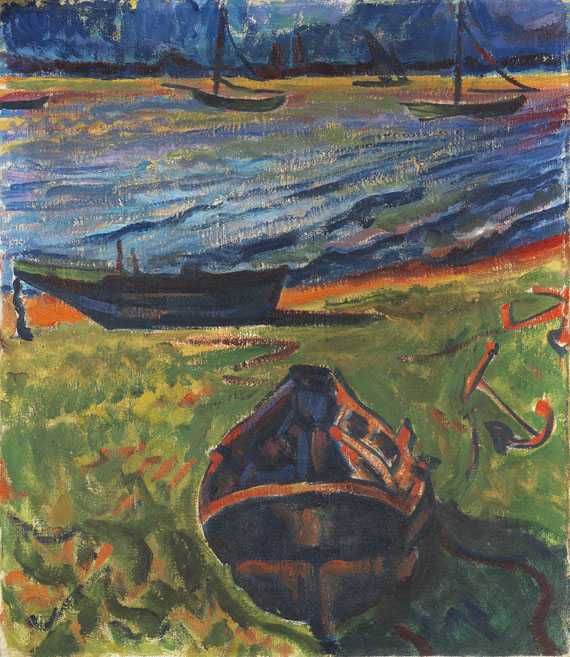 One of the very rare paintings from Pechstein's days as memeber of the 'Brücke' with painting on both sides. Most of his landscapes from the year 1910 are in possession of public collections such as the Bavarian State Picture Collections, Munich (Soika 1910/11), the Museo Thyssen-Bornemisza, Madrid (Soika (1910/18), the Austrian Galerie Belvedere, Vienna (Soika 1910/15) and the Museum Buchheim, Bernried (Soika 1910/2).

PROVENANCE: Eugen Umrath, Berlin-Dahlem (acquired in 1933, ever since in family possession).

Max Pechstein's artistic talent was discovered and encouraged at a very early age. His conventional career, first as an apprentice with a Zwickau painting master, then at the Dresden Kunstgewerbeschule and finally at the Dresden Akademie under the decorative painter Otto Gußmann, provided Pechstein with a sound craftsmanship. His ceiling painting at the Dresden Arts and Crafts Exhibition in 1906, with such an unconventional color scheme that the organisers had it sprayed with grey paint to soften the colors, attracted Erich Heckel's attention. He then invited Pechstein to join the artist group ,Die Brücke' which had been founded the year before in opposition to Impressionism. The group's aim was to "attract all revolutionary and restless forces" (Schmidt-Rottluff) and an emphasis of the power of color in painting. In this environment Pechstein's Expressionist style developed further, concentrating on elaborating the focal point of the painting with a sparse painting technique. Pechstein moved to Berlin in 1908 and became a co-founder of the ,Neue Sezession'. He painted figures, still lifes and landscapes in a moderately Expressionist style. Perhaps it was this, which lead to the artist's early and continuing success. From 1945 Pechstein taught at the Berlin Akademie der Künste.

The sea with its infinity, the manifold appearances of light and the ever changing surface, was a place of yearning and source of inspiration for vanguard painters ofModernism. The FrenchFauves went to the Mediterranean Sea where the pursued the sea's various forms of appearance in Collioure, German Expressionistswent to the Baltic Sea, where they were able to express impressions of freedom in their summer retreats. In early June 1910 Max Pechstein visited Erich Heckel inDangast and again in Moritzburg in late July. Our canvas with painting on both sides, could have well been made as a reminiscenceto these sojourns. The boat, pulled ashore, opens the view onto a slightly choppy sea. Pechstein often employed this compositional element of a diagonal pointing into the picture. With its dynamic power it can be found in many his paintings of leaving fishermen. The elevated view onto the banks, unfolding in front of the observer, is, in combination with the narrow strip of horizon, a compositional model which was particularly popular in Art Nouveau. The landscape's narrative element is in the foreground, theview from the perspective is not relevant any longer. A zonal sectioning of the color fields enhances this effect, an optical and diffuse differentiation of distance is avoided and thus an impression of closeness and instantaneousness is created. The same can be said about the landscape with the grazing cows. In this work the landscape also evolves in clearly separatestages, adding a suggestive effect to the painting with their broad color accords. The joy in color is the is theelementarydriving power behind all works of Expressionism. Color becomes the makerand no longer serves the sole purpose of coloring the depicted scene. In his body of paintings Max Pechstein put particular emphasis on power of colors. In combination with a clear compositionit can unfold a very special effect in this work.

In 1937 Hermann Max Pechstein was slandered as a "degenerate" artist. Apart from paintings his oeuvre includes more than 850 woodcuts, lithographs and engravings.