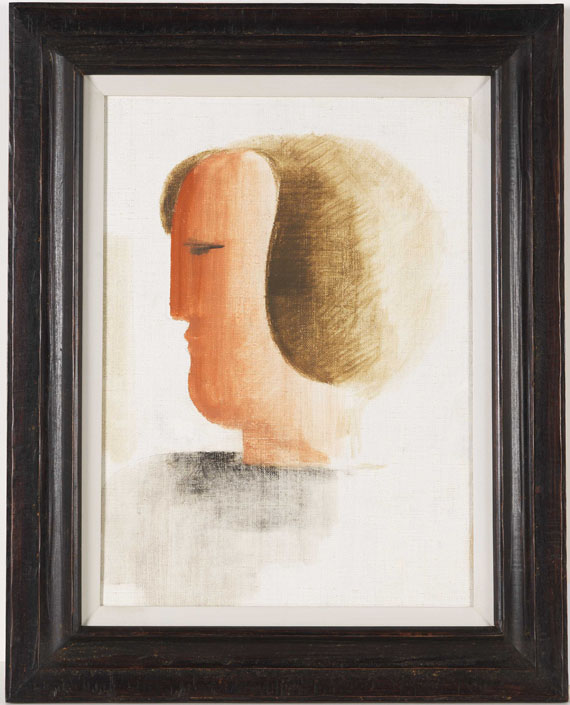 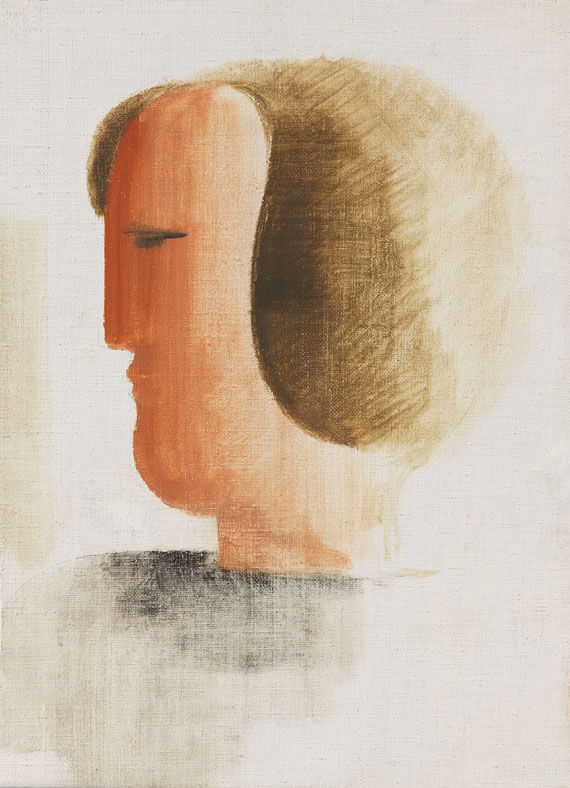 Oskar Schlemmer's figure compositions from the late Bauhaus years are among the artist's most sought-after works on the international auction market.

After an apprenticeship in a marquetry workshop from 1905 to 1909 Oskar Schlemmer studied at the Kunstgewerbeschule as well as the Akademie der Bildenden Künste in Stuttgart, where he became Adolf Hölzel's master pupil in 1912. He exhibited at the Gallery 'Der Sturm' in Berlin in 1919 and was invited to Weimar in 1920 by Gropius to run the sculpture department and the stage workshop at the Bauhaus. He became internationally known with the première of his 'Triadisches Ballett' in Stuttgart in 1922. His work for the Bauhaus and his preoccupation with the theatre are an important factor in his work, which deals mainly with the problematic of the figure in space. People, typically a stylised female figure, continued to be the predominant subject in his painting. Influenced by Cubism, he usually integrated this figures into geometric structures. A similar striving for abstraction is reflected in Schlemmer's steel and wire sculptures. Schlemmer spent the years 1928 to 1930 working on nine murals for a room in the Folkwang Museum in Essen. After Gropius' resignation in 1929 Schlemmer also left the Bauhaus and accepted a post at the Akademie in Breslau in the same year.

The painting "Kopf nach links", from the collection of the Museum of Modern Art, must be seen in connection with a mural at the Folkwang Museum in Essen. InOctober 1928 Oskar Schlemmer received the prominent commission, to paint the fountain hall from Ernst Gosebruch, director of the Folkwang Museums in Essen. A great challenge for Schlemmer, as the round hall was dominated by the fountain figures, six kneeling knaves, whichGeorg Minne had made solely for this purpose. Oskar Schlemmer managed to tie in with the given theme and at the same time to realize his very own ideas, which approached the issue in a very reduced style. The painting'Kopf nach links' is part of the preliminary works that Schlemmer made for the murals. He wrote in a letter to Will Grohmann in 1930 : "cf. Mural presentationetc. - Iwill compile and perhaps photograph what may be suitable. Could you please assign ms.bienert to include the'kopf', it is a preliminary study and very suitable for a mural, because it is so planar" (unpublished letter, transl. Of quote after: Karin von Maur, Oskar Schlemmer, Munich 1979, p. 78). In terms of formal language "Kopf nach links" stands between the rational geometrical body language that Oskar Schlemmer had realized in his days at the Bauhaus and the later, more pictorial view of physicality.

He was given a professorship at the Vereinigte Staatsschulen in Berlin in 1932, but the National Socialists forced him to resign again in 1933. During the War Schlemmer worked at the 'Institut für Malstoffe' in Wuppertal together with Willi Baumeister and Georg Muche. He led a secluded life at the end of his career and made the small series of eighteen mystical 'Fensterbilder' in 1942. Oskar Schlemmer was one of the most versatile artists of the 20th century. His occupation with murals, sculpture, drawing and painting show that he always strove to create a Gesamtkunstwerk.