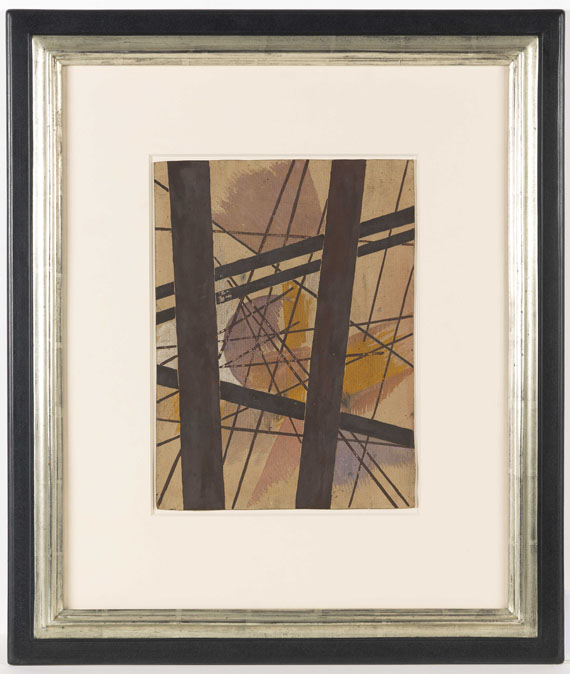 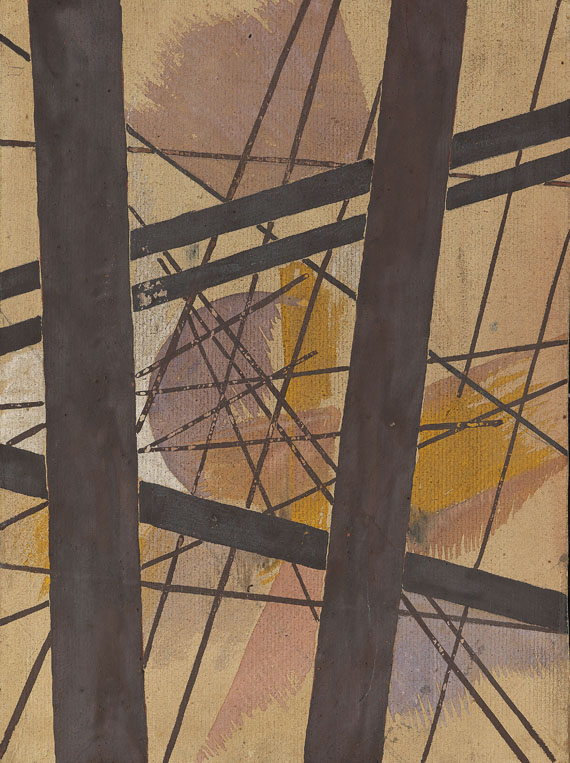 Ljubov Popowa, important and early deceased representative of Russian avant-garde, was born into a wealthy family in Iwanowskoje near Moscow in 1889. After she had received teacher training, she began to study art with Stanislav Zhukovsky and Konstantin Yuon. Ljubov Popowa also found inspiration on her numerous journeys. First and foremost, her sojourn in Paris must be mentioned: As student at the Académie de la Palette, Ljubov Popowa was taught by Henri Le Fauconnier and Jean Metzinger in winter 1912/13. Her work was substantially influenced by her direct examination of this highly modern Cubism. Back in Moscow, Vladimir Tatlin influenced the further development of her artistic development, furthermore, she was acknowledged by circles around Kazimir Malevich.

Despite her timely death at the age of 35, Ljubow Popowa left behind a remarkably comprehensive and versatile oeuvre. Popowa's unusually innovative work, which reaches from Cubism and Cubo-Futurism all the way to various manifestations of Constructivism, reflects the most decisive moment when Russian art performed the step from figuration to abstraction. Popowa is not only regarded one of the protagonists of constructivist thinking, but "her work is constructivist painting of the most accomplished kind" (Magdalena Dabrowski, Ljubow Popowa - Die Künstlerin als Konstrukteurin, in: Ljubow Popowa 1889 - 1924, Munich 1991, p. 9). In the catalog for her commemorative exhibition in Moscow in December 1924, Popowa's contemporaries call her a "construction artist" and – in line with today's appreciation– declare her last constructivist period of creation between1921 and 1924 her central one. As of 1921 Popowa made the work complex "Spatial Force Constructions", of which our work is a part. Popowa's Spatial Force Constructions present innovative solutions for the treatment of form, space and matter. As far as form is concerned, it is reduced to lines, fields and circle fragments, Popowa developed just the kind of strict composition in which a network of diagonals in various strengths seems to spread out beyond the limits of the work's surface. Accordingly, associations of a section of an industrial object are evoked. By means of cross-fading various image levels, a strong impression of spatial depth is created, which – just as it is the case with this fine gouache – is a central feature of this important work complex.

Works by the avant-garde artist Ljubov Popowa are presented in renowned international museums today, for example in the Museum of Modern Art, New York, the Museo Thyssen-Bornemisza in Madrid, the National Gallery of Canada in Ottawa, the Museum Ludwig in Cologne, the Russian Museum in St. Petersburg or the State Museum of Contemporary Art in Thessaloniki. At the age of 35 Ljubov Popowa died of typhoid fever in Moscow in 1924.

More Information
+
Sell
Get a free appraisal for a similar object!
+
Register for
Ljubov Sergeevna Popova
+
Buying from A-Z
+
Contact a specialist
Share