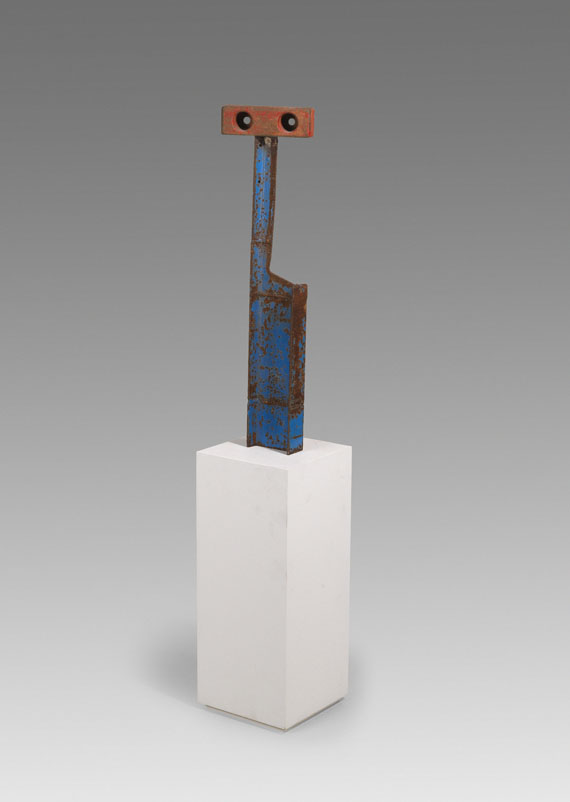 The work is registered in the artist's list of sculpture's with the number FE-27/1987. We are grateful for the kind support in cataloging this lot.

The German artist Jeff Beer was born in Mitterteich, Bavaria, in 1952. He possesses versatile artistic talents. He is active as sculptor, graphic artist and painter, photographer, writer, musician and composer. Jeff Beer began his education as a musician at theState Music School in Würzburg in 1971 and received numerous international awards. In the early 1980s he was appointed professor at the Frankfurt Music School. It was in those days that Jeff Beer became increasingly occupied with visual art. He went on study trips to Paris and New York, where he made drawings of scenesfrom everyday life. Beer, self-taught as visual artist, began to examine Henry Moore's sculpting art. As of 1984 he eventually decided to become a sculptor himself and, after he had tried out paper, ceramic, gypsum and wood, he soon found iron to be his preferred material. Jeff Beer soon made a name for himself for his unusual creations, which, just as it is the case with "Porträt eines Freundes" are particularly striking for their formal reduction and their humorous view on reality. He was soon commissioned to make sculptures for public spaces. Next to Beer's oeuvre of sculptures, he also made cycles of photographs. Recently he has been occupied with woodcuts in colors. Jeff Beer, whose work has been presented in numerous exhibitions since the 1980s, among them at the Kunsthalle Bremen and the Chelsea Art Museum New York, has been honored with numerous art prizes.