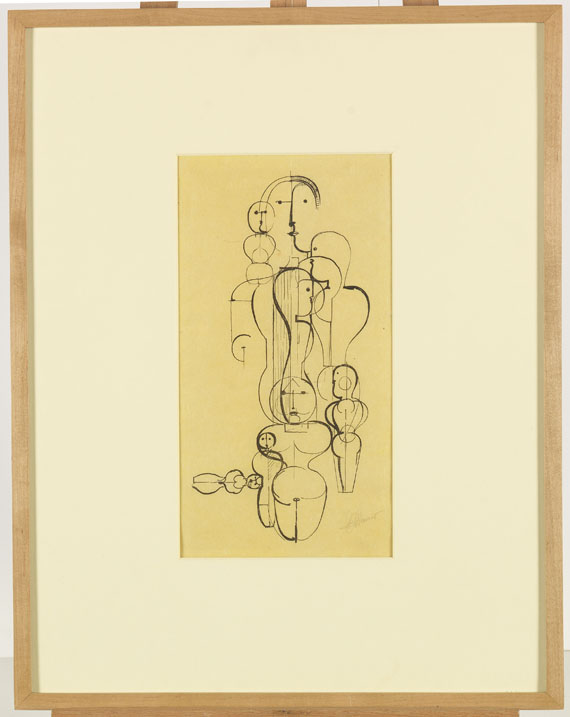 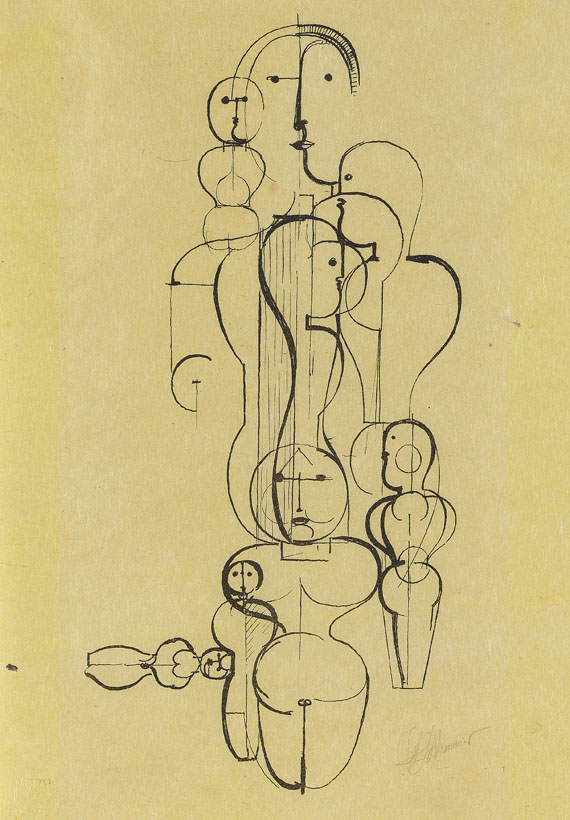 After an apprenticeship in a marquetry workshop from 1905 to 1909, Oskar Schlemmer studied at the 'Kunstgewerbeschule' as well as the 'Akademie der Bildenden Künste' in Stuttgart, where he became Adolf Hölzel's master pupil in 1912. He exhibited at the Gallery 'Der Sturm' in Berlin in 1919 and was invited to Weimar in 1920 by Gropius to run the sculpture department and the stage workshop at the Bauhaus. He became internationally known with the premiere of his 'Triadisches Ballett' in Stuttgart in 1922.

His work for the Bauhaus and his preoccupation with the theater are an important factor in his work, which deals mainly with the problematic of the figure in space, just as it is the case with this work. The discovery of physicality as an expression of human identity was in the focus of modern dance in the 1920s, which, unlike classic ballet, emphasized the body and made it the actual conveyor of expression. Oskar Schlemmer picked up this tendency in his works and rendered his very own interpretations. Reduced to elementary codes, this is the two-dimensional exploitation of the physical aspects of Schlemmer's "Konzentrische Gruppe" from the first Bauhaus portfolio, which was exclusively reserved for contributions from masters at the Staatliche Bauhaus.

Between 1928 to 1930 he was working on nine murals for a room in the Folkwang Museum in Essen. After Gropius' resignation in 1929 Schlemmer also left the Bauhaus and accepted a post at the Academy in Wroclaw the same year. He was given a professorship at the 'Vereinigte Staatsschulen' in Berlin in 1932, but the National Socialists forced him to resign again in 1933. During the war Schlemmer worked at the 'Institut für Malstoffe' in Wuppertal together with Willi Baumeister and Georg Muche. He led a secluded life at the end of his career and made the small series of eighteen mystical 'Fensterbilder' (Window Pictures) in 1942. Oskar Schlemmer was one of the most versatile artists of the 20th century. His occupation with murals, sculpture, drawing and painting show that he always strove to create a Gesamtkunstwerk.