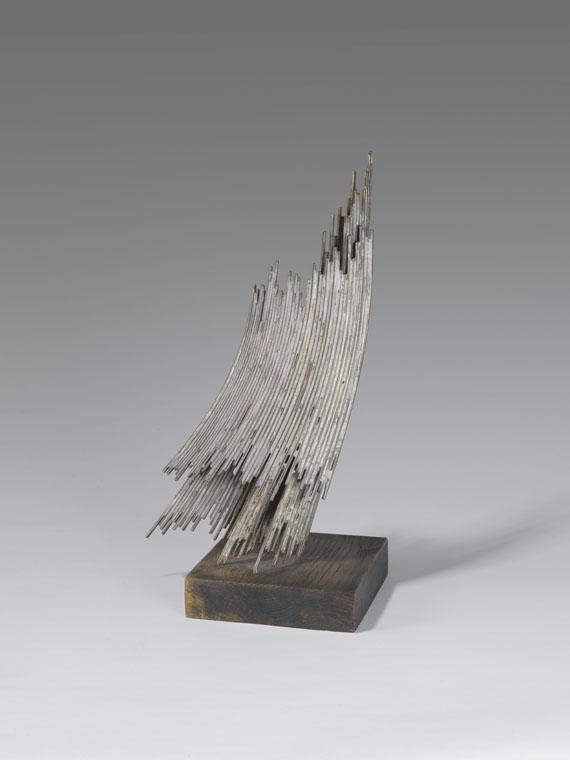 In 1952 Martin and Brigitte Matschinsky-Denninghoff met at Gustav Rudolf Sellner's experimental theatre in Darmstadt. Born in Berlin in1923, Brigitte Matschinsky-Denninghoff had studied at the art academies in Berlin and Munich and worked as an assititant to Henty Moore and Antoine Pevsner. Martin Matschinsky-Denninghoff, who was born in Grötzingen near Baden in 1921, finished an apprenticeship as a photographer and spent the years between 1940 and 1947 at the army and in war captivity. In 1948 he was a co-founder of the Otto-Falkenberg-Schule in Munich. A shared admiration and veneration of Henry Moore as well as the Russian Constructivist Antoine Pevsner led to an artistic collaboration of the two artists that has lasted since 1955. Winning the Prix Bourdelle and showing at the Kassel documenta for the first time in 1959 marked the breakthrough for the couple. It was followed by participation in the Venice Biennale and numerous German and international exhibitions. Their work was accompanied by many constructive encounters with distinguished artists such as Serge Poliakoff and Fritz Winter.

Since the 1960s they have been leaving their mark on public spaces in Europe and elsewhere with their monumental sculptures. The utterly distinctive hall mark of their work lies in the technique they have developed for it. Bundles of steel tubing or thin stainless steel tubing are welded over a shaping framework that makes possible such vast dimensions in construction as well as bold shifts in the centre of gravity. Their celebrated work 'Berlin' was put in place at the Berlin Europa Center on the occasion of the city's 750th anniversary in 1987. Their prolific production in sculpture has been complemented in recent years by Martin Matschinsky's painting, which is in the tradition of French tachisme and German Informel.