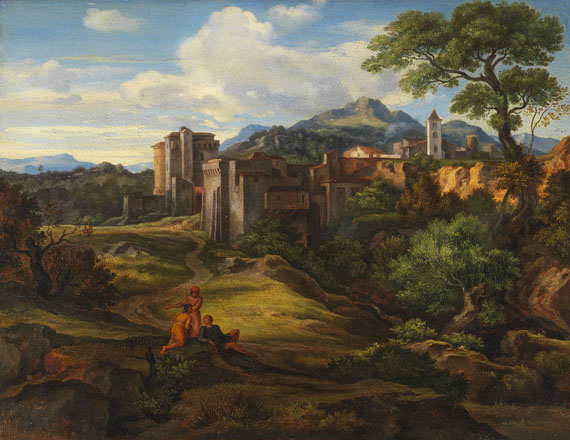 Ferdinand Olivier was born son of the professor for education science Ferdinand Olivier the Elder in Dessau in 1785, his mother was the opera singer Louise Niedhart. Around1801/02 he and his brothers Heinrich (born in 1783) and Friedrich (born in 1791) received first lessons in drawing and etching from the landscape painter Karl Wilhelm Kolbein in their hometown Dessau. Over the following years Ferdinand Olivier time and again traveled to Berlin where he attended August Wilhelm Schlegel's lectures on literature and art. In 1804 he and his brother Heinrich moved to Dresden where he enrolled at the Academy of Visual Arts, Jakob Wilhelm Mechau and Carl Ludwig Kaaz where among his teachers. However, he could not identify with their concepts of painting ideal landscapes. What was much more inspiring for his development was the contact with Friedrich August von Klinkowström, Philipp Otto Runge and Caspar David Friedrich, through them he encountered Dresden Romanticism. In 1807 Olivier went to Paris for diplomatic service, but he soon filed for release in order to have more time for his art studies. All in a sense of a romantic return to medieval art, Olivier predominantly copied medieval panel paintings in Parisian museums. Together with his brother Friedrich he traveled through the Harz mountains in 1810, a year later they relocated to Vienna. Revitalized contact with Schlegel and the encounter with Joseph Anton Koch fortify both Olivier's deeply protestant belief as well as his concept of art. Olivier's studio in Vienna soon became a social and artistic meeting point for both protestant and catholic members of the Nazarenes. Among them were his brothers Heinrich and Friedrich, Julius Schnorr von Carolsfeld, Theodor Rehbenitz and Philipp Veit. In 1816 Ferdinand and Friedrich Olivier, along with Schnorr von Carolsfeld were accepted into the Guild of St. Luke. The two brothers spent the summers of 1815 and 1817 in Salzburg and the surrounding mountains. Up until 1829 the works by Olivier were characterized by motifs from this region. The series of lithographs "Sieben Gegenden aus Salzburg und Berchtesgaden" marked the peak of this Salzburg period. The group of works is characterized by artistic clarity and profound content. When his brother Friedrich and Schnorr von Carolsfeld moved to Rome for three years in 1817, Olivier stayed in Vienna, likely because he had married a woman with three children. But still, paintings made from the mid 1820s showed the ideal concept of southern landscapes that his brother had brought home with him from Italy. In 1830 Olivier followed his brother and Schnorr von Carolsfeld to Munich, where he was appointed professor for art history at the Academy of Visual Arts in 1832.

"The painting does not show any particular town in the Campagna, it is a composed ideal landscape, which follows the type of 'heroic landscape' developed by Joseph Anton Koch. Koch also discovered the picturesque appeal of the Monti Sabini, with their rough rocks over sylvan valleys and their ridges of hills and mountains. This unspoilt landscapes with villages such as Olevano and Civitella that seem to grow out of the rocks, offered countless motifs for the German painters who spent their summers there. Ferdinand Olivier also rendered them in this work. Contrary to his brother Friedrich, Ferdinand Olivier had never been to Italy. However, sketches and oil paintings his brother had made there had such a strong effect on him that his landscape illustrations gradually became Italian ideal landscapes with staffage figures. Cubically conceived buildings with clear-cut lines, looming in the lovely southern landscape, are characteristic of his work." (Thea Vignau-Wilberg, in: ex. cat. Munich 1985, pp. 166ff.).

At the peak of his creation he made numerous landscapes, often with scenes from the bible. Alongside Albrecht Dürer, it was especially old German and Dutch artists that counted among his models. Ferdinand Olivier is regarded one of the most important Nazarene landscape painters. In 1841 he died in Munich. [CB].