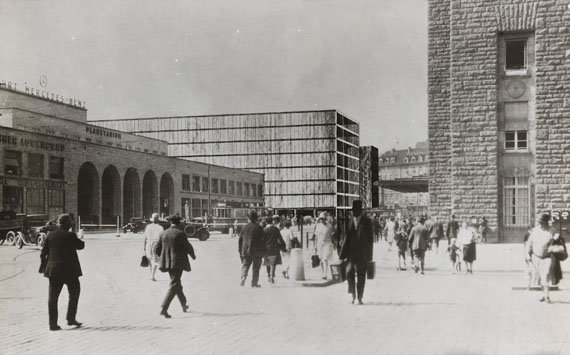 In order to work out and visualize spatial interdependence, Ludwig Mies van der Rohe often used, just as it is the case with this work, contemporary photographs, into which he drew or collaged his own epochal architectural drafts. Once he had conferred right to use, the studies were photographed again for demonstration and presentation purposes. For this task Mies van der Rohe often worked with the Berlin photographer Curt Rehbein. Rehbein had already shot Mies van der Rohe's legendary design project for a glass high rise on Friedrichstraße in Berlin in the 1920s, as well as a model for a glass skyscraper intended as continuation of the innovative honeycombed steel tube construction. In 1928 Ludwig Mies van der Rohe also executed a design project for an office building in steel tube construction for the Stuttgart Hindenburgplatz, renamed Arnulf-Klett-Platz in 1976. This contemporary photograph after a photomontage by the artist is an impressive document thereof. Mies van der Rohe's unrealized design of a strictly geometric glass cube insert like a paralleling bar between Hindenburg building and main station. Despite its eight floors, it is the airiness of the glass facade that makes for the ingenious contrast with the heavy block-like style of the surrounding buildings.

In 1929 Ludwig Mies van der Rohe planned the German Pavilion for the International Exhibition in Barcelona. For the interior he created the famous "Barcelona" furniture. In 1930 the Villa Tugendhat in Brno, Czech Republic, was completed. The same year Ludwig Mies van der Rohe took over directorship of the Bauhaus in Dessau, and would be the last to hold this post before it was closed in 1933. Afterward Ludwig Mies van der Rohe was active as free-lance architect in Berlin. In 1938 he emigrated to the U.S.A. where he opened an architecture firm in Chicago. Between 1938 and 1958 Ludwig Mies van der Rohe was director of the department of architecture at the Illinois Institute of Technology. In the U.S.A. he made his main works in international modernist style, among them the Fox River House (1945-1950), the House Farnsworth (1946-1951) in Plano, Illinois, the Lake Shore Drive apartments in Chicago (1948-1951) and the Lafayette Towers in Detroit (1955-1963). The Seagram Building in New York (1958) may well be called his masterpiece. One of his last buildings was the Neue Nationalgalerie in Berlin (1962).