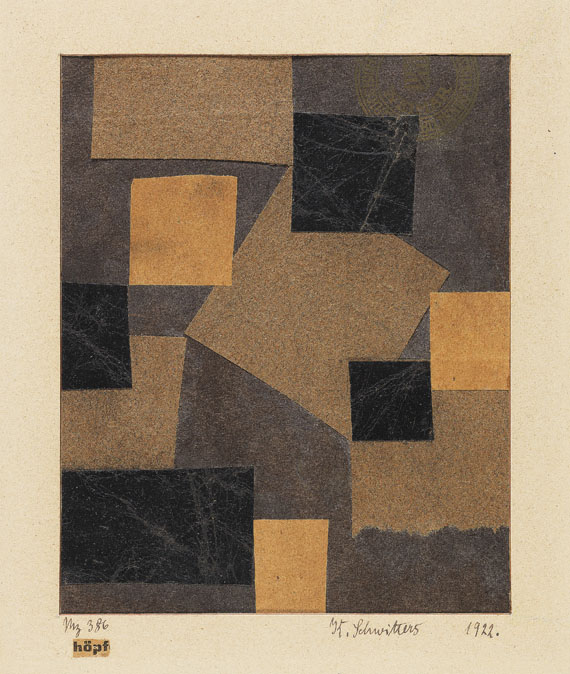 Kurt Schwitters attended the Kunstgewerbeschule in Hanover from 1908 to 1909 and subsequently studied at the Kunstakademie in Dresden. The long academic education he had in Dresden, primarily under the Frans Hals-oriented Carl Bantzer, seemed to prepare for a rather conventional painter's career. Accordingly, his early works display little influence by the modern age. In 1917 the 30 year-old artist was drafted into military service, which he spent in the orderly room, due to his suffering from epilepsy. He was discharged after four months. The impressions of the war and the inflation made him a modern artist, who even left Expressionism behind; his first collages emerged in 1918, for which Schwitters used litter found by chance. His art and literary texts became a Dadaist institution in Hanover, which he called 'Merz', a fragment of the word 'Commerzbank'. 'Anna Blume', a collection of poems and prosaic texts published in 1919, made him famous far beyond Hanover's boundaries. He got in contact with Herwarth Walden, Hans Arp and Tristan Tzara and took part in the "Sturm"-exhibitions in New York and Zurich. His strong ties to the Bauhaus-artists, the Dutch Dadaists and constructivists, to whom he dedicated the first issue of the "Merz"-magazine in 1923, became important for Schwitters as well.

'Merz'drawings, asKurt Schwitters called his dadaist collagesmade as of 1918, are considered, along with is 'Merz' pictures, the artist's most importantand most famous body of works. After World War ISchwitters liberated himself and his art from any kind of academic and art-historical tradition. 'Merz'to Schwitters was not only a description of the styleof his one man movement, but rather an artistic revolution and new beginning. In his 'Merz' works Schwitters breaks the borders between the genres, he integrates different materials, newspaper clippings, tickets and other trivial documents of everyday life and thus converts from introvert, melancholic artistto an experimentalenfant terrible of a tremendousartistic productivity. Schwitter's also expressed his uninhibited as poet, writer, architect and entertainer and created aprovoking and impressive total work of art. The internationally highly sought-after 'Merz' are part of it.

From 1923 on he worked as a commercial artist, graphic designer and typographer for several companies from Hanover and beyond. In 1927 he founded the 'ring neuer werbegestalter' (circle of new commercial artists) together with Cesar Domela, Lázlo Moholy-Nagy and Friedrich Vordemberge-Gildewart, in which Willi Baumeister and Walter Dexel also joined. Apart from this professional work, he continued the collages and material pictures of the "Merz"-series. In the mid-30's he was successful on an international level for the first time; in 1937 he emigrated to Norway. His exile in Norway was followed by his escape from the German troops to England, where his isolated position, from which he already suffered back in Norway, did not improve significantly. Schwitters died in Ambleside (Westmorland) on 8 January 1948. It is only after his death that his life's work is appreciated internationally. Schwitters was far ahead of his time and strongly influenced the art of assemblage of the neo-dadaist artists, like Robert Rauschenberg for example. 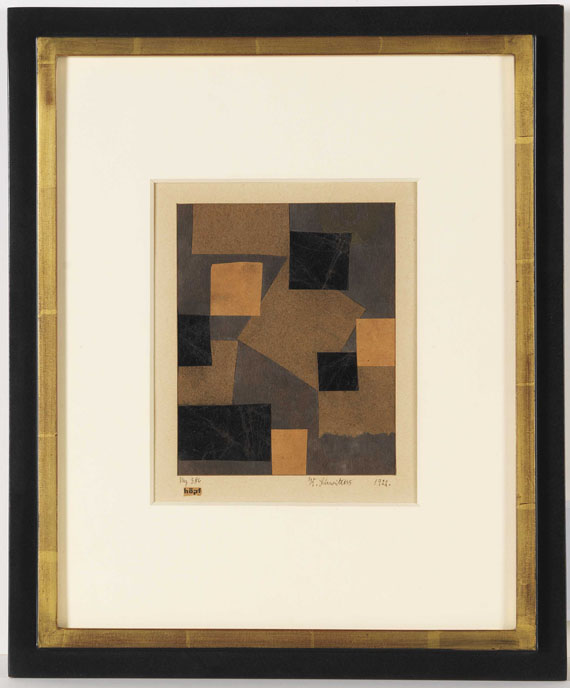