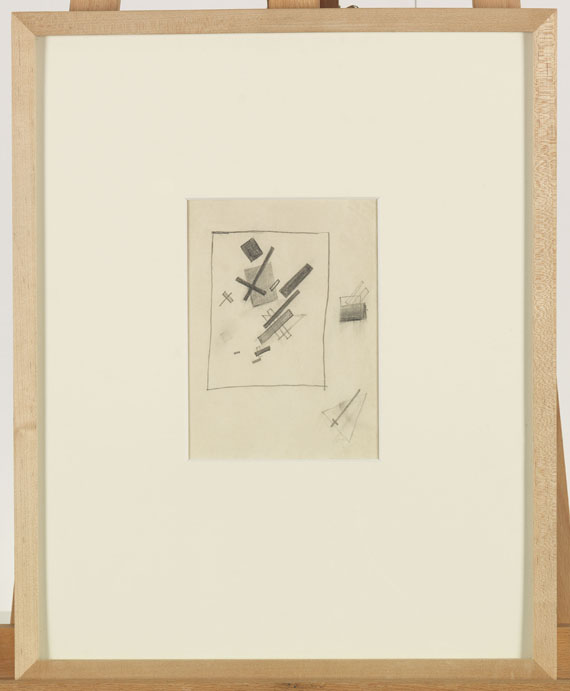 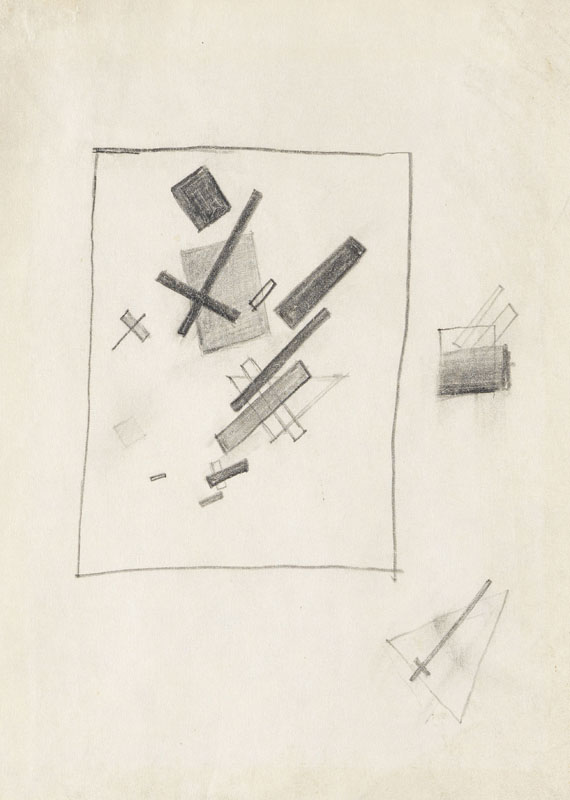 Other than specified in the catalog, this lot number may also be subject to differential taxation + 7% import turnover tax (savings of 5% in comparison with regular taxation).
Accompanied by photo-expertise issued by Andrei Nakov on 26 May, 1982.

EXHIBITION: Rationale Spekulationen. Constructivist tendencies in European art between 1915 and 1930, from German private collections, Städtisches Museum Mönchengladbach, 1st October - 26 November, 1972, presumably cat. no. 124 (with differing dimensions, illu. on title page (section)). The catalog will be sold together with the drawing.

Kazimir Malevich, nothing less but an icon of geometric abstraction, was born in Kiev in 1878. In 1895 he began his studies at the local art academy, first works under the influence of Impressionism were made. At the turn of the century Kazimir Malevich relocated to Moscow, where he soon came in contact with the avant-garde and was occupied with Symbolism, fascinated by Neo-Primitivism, and eventually became an influential figure of Cubo-Futurism. As of 1913 he made geometrical, non-representational pictures.

At an exhibition in Saint Petersburg in1915, Malevich presented his epochal painting "Black Square", which, up until today, is considered the initial work of Suprematism. The contemporary art world conceived it as a plain provocation of the academic-figurative style. Malevich, with this and other works, would become the founding father of the first absolutely non-representational art movement, which would pave the path for Constructivism and Bauhaus painting. Unlike Kandinsky's painting, Malevich'sstyle does not leave any room for expressive duct and, accordingly, does not allow any associations whatsoever. He tried to transfer the artist's emotional and spiritual world into strictly geometrical forms that do not find any analogies in the figurative world. As far as the artwork's genesis is concerned, Malevich sees himself, in line with inventors and engineers of industrialization, as a constructor of a virtual world of forms that has been unparalleled in the history of art so far. This drawing by Malevich is an impressive visual document of the presumably most innovative and most dramatic moment in art history of the 20th century.

As of the 1920s it became more difficult for Russian Modernism, as a new conservatism began to spread. The Moscow exhibition "15 Years of Soviet Art" in 1932 even used Malevich's works as negative examples of revolutionary painting and showed them in a separate section. As of the early 1920s Kazimir Malevich returned to figuration and created a work complex that has been much praised by research lately. Kazimir Malevich's artworks are in possession of the Russian Museum in Saint Petersburg, the Cologne Museum Ludwig, the Amsterdam Stedelijk Museum and the Museum of Modern Art in New York. From the countless retrospectives that honored his oeuvre, the exhibition "Malewitsch und die russische Avantgarde" (2013/14, Amsterdam and Bonn) is the latest example. Kazimir Malevich died in Leningrad in 1935.

More Information
+
Sell
Get a free appraisal for a similar object!
+
Register for
Kasimir Malewitsch
+
Buying from A-Z
+
Contact a specialist
Share