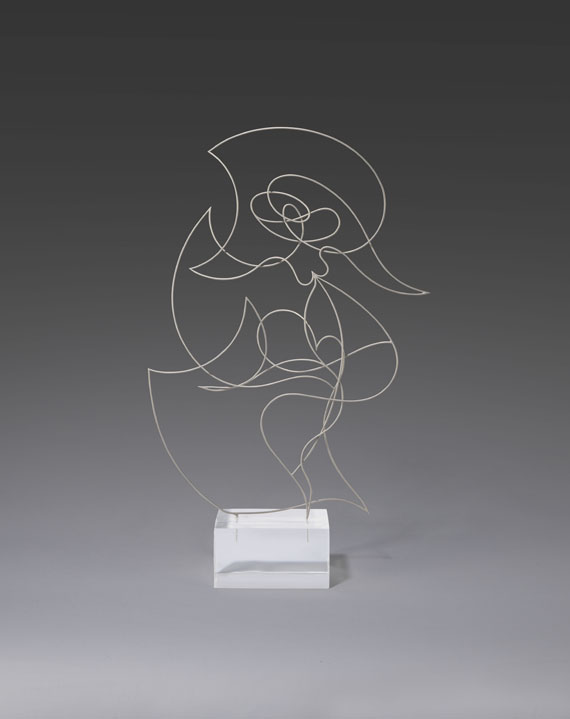 enlarge image
+
200
Giacomo Balla
Ballerina V, 1922.
Estimate:
€ 9,000 / $ 8,280
Sold:
€ 11,250 / $ 10,350
(incl. 25% surcharge)
Ballerina V. 1922.
Chromed brass sculpture on plexiglass base.
Numbered in lower right on verso. Base with name "Balla Futurista" and corrected numbering. Presumably trial proof aside from the edition of 9 copies (with corrected number on base and withnumber 5/12 on iron wire). Height: 53 cm (20,8 in), including base.
An iron wire sculpture by Balla from 1922 served as model for this work. In 1968 a posthumous edition in chromed brass after the original was released by the artist's estate. [JS].
Other than specified in the catalog, this lot number may also be subject to differential taxation + 7% import turnover tax (savings of 5% in comparison with regular taxation).
Accompanied by a photo expertise issued by Giovanni Lista, Paris, from 6 May, 2014.

Giacomo Balla, painter, sculptor and stage and fashion designer, was born inTurin in 1871. At first the self-taught artists painted landscapes in front of nature and portraits. His short and irregular stroke of the brush, as well as the fidgety lighting shows his closeness to Divisionism. When Balla visited Paris for nine months in 1900, he discovered the living spaces of a metropolis on the light-flooded, bustling boulevards at night.

In his futurist works Giacomo Balla transfers the chrono-photographic analysis of motion from photography. In 1909 the famous theses about literary Futurism by the poet Marinetti were published and confirmed Balla's ideas. The following year he wrote, together with U. Boccioni, C. Carrà, G. Severini and L. Russolo, the "Manifesto dei pittori futuristi" as well as the"Manifesto tecnico della pittura futurista". His first futuristic picture "Dynamism of a Dog on a Leash"(1912) shows how Balla analyzed motion patterns and how he illustrated the different stages of motion through overlaying single abstract forms.

As of 1913 he signed his pictures"Futur Balla". The chromatic dissection of light and the breakdown of objects and figures in motion into geometric forms were taken to the realms of abstraction. Balla was also active as commercial artist, he made clothes, carpets, vasesand lamps. He experimented with objects made of corrugated board, cloth, tin foil, mirrors and color glass. With these "Complessi plastici“ he was one of the founding fathers of abstract sculpting. As of around 1930 Balla gradually abandoned Futurism and eventually returned to traditional figuration in1937, rendering veristic illustrations of themes from his youth. The artist died in Rome in 1958.