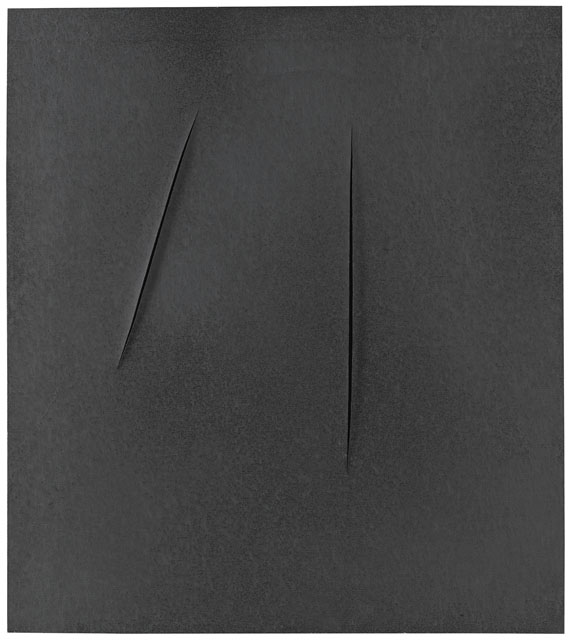 The work is registered at the Fondazione Lucio Fontana, Milan, under the number 355/31.

Lucio Fontana was born in Rosario di Santa Fé in Argentina on 19 February 1899 as son of an Italian sculptor. In 1905 the artist's family moved from Argentina to Milan, where Fontana studied engineering under Carlo Cattaneo from 1914. After serving in the Italian armed forces, he graduated in engineering in 1918. Returning to Argentina in 1922, he worked at first in his father's studio for sculpture before opening one of his own in 1924. By 1928 he was again in Milan, where he studied sculpture at the Accademia di Brera. In addition to figurative sculpture, he produced terracotta reliefs and painted plaster plaques from 1931, which show that he was moving towards abstraction. In 1934 Fontana joined the Paris group 'Abstraction-Création', founding the Milan branch. The following year it issued a manifesto on abstract art and Fontana had his first one-man show at the Galleria del Milione in Milan. From 1939 the artist was again in Argentina, where he co-founded the Altamira private academy in 1946, issuing with his students the 'Manifesto Blanco' calling for a synthesis of genres and the rejection of conventional materials. Once again in Milan, Fontana formulated his quest for a new spatial art in 1948 in the first 'Technical Manifesto of Spatialism' and founded the 'Movimento spaziale' group. In 1949 he realised his first 'Ambiente spaziale', a precursor of Environment, in a Milan gallery. That same year he produced his first perforated canvases, which, like all the works to follow, bore the title 'Concetto spaziale' (Spatial concept). Concomitantly with the perforations of the 1950s, he also produced the 'Pietre' series. In 1958 Fontana embarked on his celebrated gashed canvases, violent interventions with sharp knives in what were usually monochrome painted surfaces.

The most famous artistic statement by Fontana is also expressed by this work, about which the artist says the following: "All my art is characterized by this purity, by the philosophy of nothingness, the fact that nothing is the nothingness of destruction, but the nothingness of creation[..] And the cut[..] did not intend to destroy the picture, on contrary, the intention is to explore a dimension beyond the image" (transl. of quote after: Bettina Ruhrberg, Kritisches Lexikon der Gegenwartskunst, Munich 1993, p. 3). Through the gashes into the monochrome, dark gray canvas of our work,Fontana achieves a dislimitation of his painting into the depth. The impression of an extention of space, not only on the rim of our work, but also through the opened canvaswhere the eye of the observer seems to wander off into the mysterious depth of the seemingly infinite space, is increase to a meditative imaginary space, which, aFontana'sadded phrase"attese" explains, can be expected. The canvas is no longer mere carries of the artist's phantasy, but moves into the focus of artistic examination through its materilaity, making it a projected area for the observer's eye. With huis minimalist "Tagli" Fontana made a decisive contribution to the contemporary interest in spatial dislimination of the artwork.

The early 1960s saw Fontana combining his pictorial devices with areas of paint, often mixed with sand and applied in thick layers which were often scored and incised. These works were followed by large, spherical bronze objects. During this period there were numerous one-man and group shows, including regular participation in the Venice Biennale, documenta 4 in Kassel (1968) and the touring exhibition mounted by the Museum of Modern Art, New York (1966-68). Fontana's career closed with 'La fine di dio', an impressive series of works which exerted an enormous influence on the younger generation of artists in the 1960s. Lucio Fontana died in Varese on 7 September 1968. 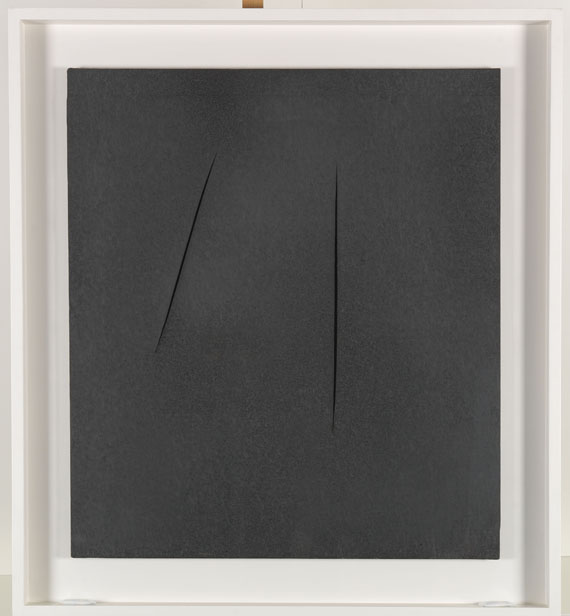