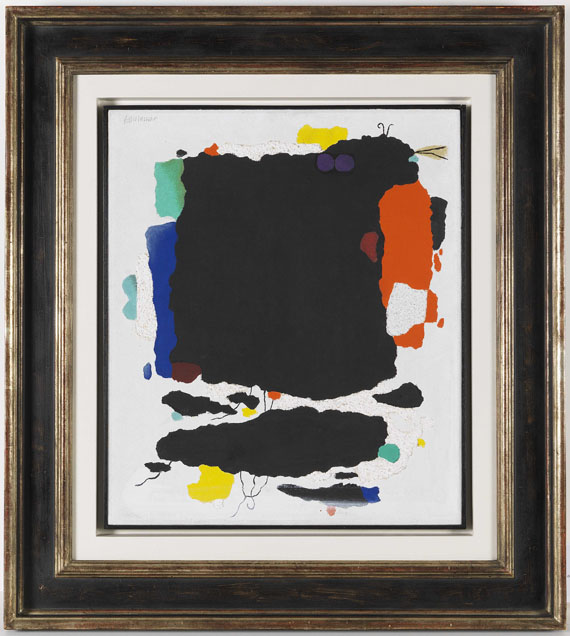 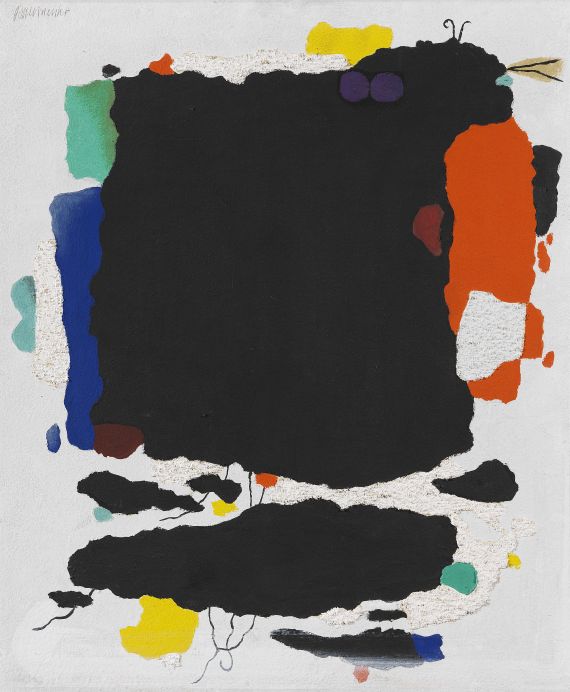 706
Willi Baumeister
Mo, 1954.
Oil
Estimate:
€ 300,000 / $ 312,000
Sold:
€ 439,200 / $ 456.768
(incl. 22% surcharge)
Mo. 1954.
Oil with synthetic resin and sand on hardfiber board.
Beye/Baumeister 1974. Signed upper left. Once more signed, as well as dated, titled and inscribed with dimensions on verso. With stamp "atelier willi baumeister". 54 x 46 cm (21,2 x 18,1 in).
Baumeister derived the title from the word "Montaru", which refers to the series "Montaru mit Gondel" bezeichnet, of which this painting is part. [KP/JS].
Paintings from the "Montaru"-series are in possession of, among others, the collection of Nationalgalerie Berlin, the Sprengel Museum Hanover, the Städtische Kunsthalle Mannheim and the Karl Ernst Osthaus-Museum, Hagen.

During his apprenticeship as a decorative painter Willi Baumeister already visited evening classes at the Stuttgart Kunstakademie. From 1909 to 1912 he attended Adolf Hölzel's composition class where he first met the later Bauhaus painter Oskar Schlemmer who was to become a life-long friend. In 1919/20 he produced his first 'Mauerbilder', panels with a wall-like relief structure - created by adding sand and putty to the paint - and cubist forms. These works brought about Baumeister's international breakthrough. In 1928 the Frankfurt Städelschule appointed the artist to run the applied arts, typography and fabric printing class. Baumeister joined the 'Cercle Carré' in 1930 and in 1931 he became a member of 'Abstraction Création'. During the 'Third Reich' Baumeister was banned as a 'degenerate' artist and rarely showed himself in public. During the war Baumeister wrote the book 'Das Unbekannte in der Kunst' (The Unknown in Art) which was first published in 1947. During these years as a 'degenerate artist' he spent his time studying prehistoric and Oriental art, which was to provide him with the motifs for his 'Eidos' pictures and 'Ideogrammes'. He resumed teaching after the war when he accepted a post at the Kunstakademie in Stuttgart.

Baumeister's later style culminates in hisfamous "Montaru" series, among which a collage offered in this auction also counts(seelot712). Works from this series, made between 1953 and 1955, are characterized by the integration, combination and artistic development of pictorial elements from earlier periods of creation, and find their earliest precursors in works from around 1951.The black color field, typical of the "Montaru" series, which dominates the center of the image and henceforth– just as it is the case with this work– dissects the works into a thrilling composition in its margins, can be foundin the painting"Schwarzes Phantom" (Museo Thyssen-Bornemisza, Madrid) from1952. Just a few month later, inJanuaryor February1953, Baumeister eventually began to work on the painting "Montaru 1", which todayis in possession of the Sprengel Museum inHanover, marking the beginning of the famous"Montaru" series. An onomatopoetic creation by the artist is eponymous, combining the words "mons" or"mont" (mountain) and the sound "aru", which hints at the pictures impervious darkness and is derived from the name of the biblical mountainArarat. The blackness, which seems to expand onto and hover above the image surface, is in a characteristic constellation of tension with the image carrier . Further paintings from this impressive work complex are in possession of, among otrhers, the Nationalgalerie Berlin, theStädtische Kunsthalle Mannheim and the Karl Ernst Osthaus-Museums, Hagen.

With his extensive oeuvre and his art-theoretic publications Baumeister is considered one of the most important modern German artists. His varied oeuvre ranges from figurative works at the beginning to increasingly abstract forms.