Born at Tettenweis near Griesbach in Lower Bavaria, Franz von Stuck attended the Munich School for the Applied Arts after secondary school, transferring in 1881 to the Königliche Akademie der bildenden Künste [Royal Academy for the Fine Arts]. The drawings he did for the portfolio 'Allegorien und Embleme' ['Allegories and Emblems'], published by Gerlach and Schenk in Vienna, made his reputation as an outstanding draughtsman as early as 1882. Awarded the gold medal for the painting 'Die Wächter des Paradieses' ['The Guardians of Paradise'] at the Annual Exhibition at the Munich Glass Palace in 1889, Stuck thenceforward devoted himself entirely to painting, becoming a portraitist who was much in demand. His sitters' regal poses elevate them above the mundane, making them sublime and timeless. In addition to some early landscapes and numerous portraits, the painter's œuvre is notable primarily for mythological and symbolic themes. At the 1893 'Munich Secession' exhibition - Stuck was a founder member - he showed 'Die Sünde' ['Sin'], creating a sensation. When only thirty-two, he was appointed professor at the Munich Academy in 1895. Moreover, he also became a member of the board of 'Genossenschaft Pan', publishers of the art magazine 'Pan', for which he designed the cover. In 1897 construction work began in Munich on the Villa Stuck in Prinzregentenstraße. The artist himself designed the architecture, the interior decoration and the furnishings for it and the ensemble amounted to one of the major total works of art of its day. The building, with which Stuck, the 'prince of artists', erected a monument to himself in the grand manner of the Renaissance, is acclaimed as a supreme achievement of its kind in architecture. The furnishings of the Villa were awarded a gold medal at the 1900 Paris Exhibition. The many other prizes and honours awarded to Stuck included the Ritterkreuz des Verdienstordens der Bayerischen Krone [Cross of Knighthood in the Order of Merit of the Bavarian Crown], a distinction coupled with elevation to knighthood.

In the last phase of his work, Stuck concentrated once more primarily on sculpture. The recipient of so many distinctions and an honorary member of numerous European academies, Franz von Stuck died in Munich in 1928. 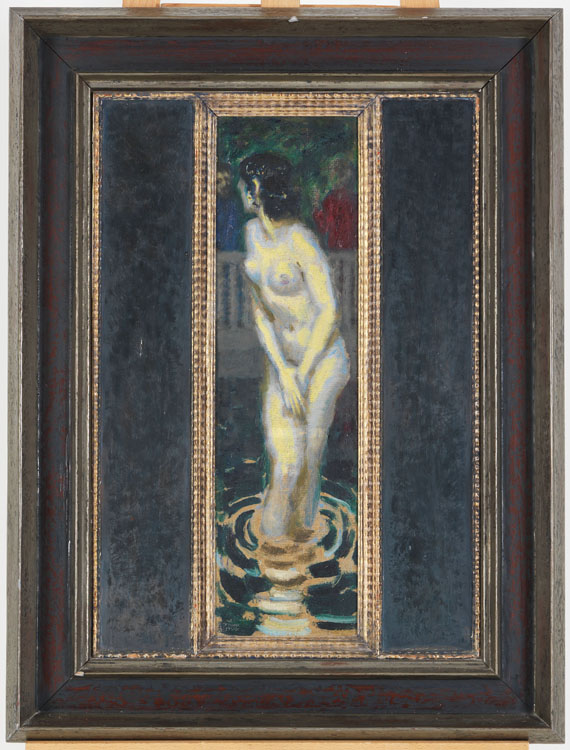