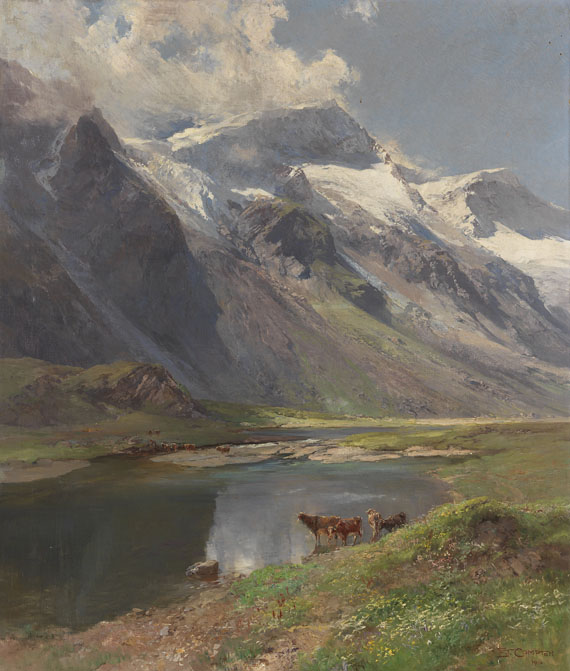 Edward Theodore Compton began to teach himself to draw from nature in 1863, attended art schools in England and went to Germany, first Darmstadt and then Munich from 1869. From 1874 Compton lived at Feldafing on Lake Starnberg. The impression made on him by the Bernese Oberland was so strong that Compton began to concentrate on Alpine scenery in his work at a time when the Alps were all the rage in England. Further trips took Compton to Switzerland, the Austrian Tyrol, Spain, Corsica, North Africa and Norway. Compton made a name for himself with paintings of the 'Forum Romanum' (1877), 'The Matterhorn' (1880) and 'Die Gipfelstürmer' ['Storming the Peak'] (1888). Compton's landscapes are so flooded with light that his work can be classified as Impressionist. Alongside oil paintings, Compton did numerous watercolors and drawings, many of which are in the literature published by the German and Austrian Alpenvereine [Alpine Associations]. Many of Compton's works appeared as xylographs (woodcuts) in such journals as 'Über Land and Meer', 'Leipziger Illustrierte Zeitschrift' and 'Meisterwerke der Holzschneidekunst'. Compton's woodcuts exerted an enormous influence on other Alpine painters such as Ernst Heinrich Platz and Karl Arnold aus. His children, Dora and Edward Harrison Compton, continued their father's work as painters of mountain landscapes.