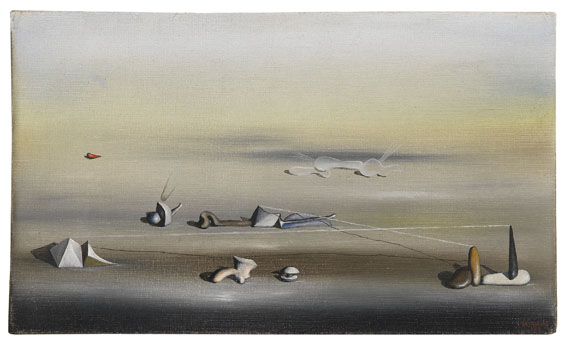 Raymond Georges Yves Tanguy was born in Paris in 1900. Joining the merchant marine in 1918, he travelled to Brazil, Argentina, Africa, Portugal and England. On returning to France in 1922, he earned a livelihood with odd jobs. A much-cited early key experience was Tanguy's encounter with two works by Giorgio De Chirico he saw in an art dealer's window, which inspired him to begin a career of his own as an entirely self-taught artist. In 1924 Tanguy did his first oil paintings and through meeting André Breton made his first contacts with Surrealism and leading exponents of the movement such as Aragon, Masson, Magritte, Dalí and Max Ernst. In 1927 Tanguy had his first one-man show at the Galerie Surréaliste in Paris. He would retain the distinctive formal idiom and imagery he developed in the 1920s throughout his career. In his work Tanguy linked the Surrealist 'principle of guiding chance' with a technique of painting in glazes of color in the Old Master manner. In 1932 Tanguy embarked on intensive collaboration with Stanley William Hayter in the latter's experimental workshop for the graphic arts (Atelier 17, Paris). There Tanguy translated his idea of the immateriality of art with assured line and texture into etchings that were often untitled and issued in very limited editions. The years that followed saw Tanguy exhibit his work at numerous one-man shows and group shows in Brüssel, Paris and the US.

A journey to Africa in the early 1930s left a massive impression on the artist. However, it was not the traditions of orientalism with all its colors and ornamental decorations, it was the clear African sunlight and the strange rock formations that surprised and fascinated him. Paintings from the years that followed his journey reflect this clear and shiny light,all traces of Tanguy's earlier darker works have vanished. What is especially characteristic of these works is the dissolution of the clearly defined horizon, earth and sky seem to melt in with one another, transforming to one continuous space. This uncertainty is intensified by various forms of rocks scattered in that space. With partly opaque, partly translucent or even transparent surfaces it is not sure whether they lie on the ground or hover above it. This way Tanguy attains a marvellous poetic imagery that gains its special appeal through the subtle indifference of the surreal space.

After the outbreak of the second world war, Tanguy emigrated to the US in 1939, where he married the American Surrealist painter Kay Sage in 1940 and ultimately settled with her in Connecticut. Tanguy and his wife maintained regular contact with Alexander Calder, André Masson, Max Ernst and Marcel Duchamp. In 1944 Tanguy exhibited work jointly with Jackson Pollock and Mark Rothko at Peggy Guggenheim's Art of the Century gallery. Tanguy continued to be so successful that he was awarded a medal when he took part in the American Painting exhibition in 1950. Yves Tanguy died in Woodbury, Connecticut, on 15 January 1955. That same year the Museum of Modern Art in New York mounted a Tanguy retrospective. [CB]. 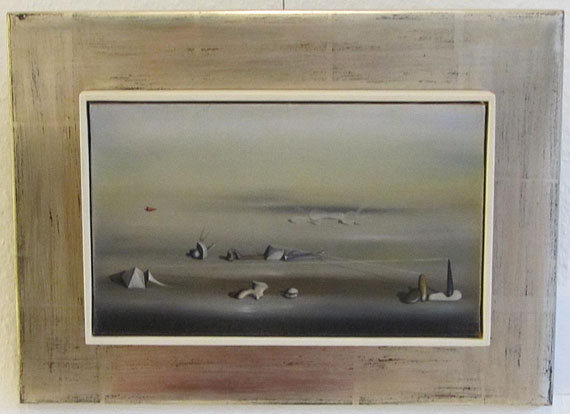