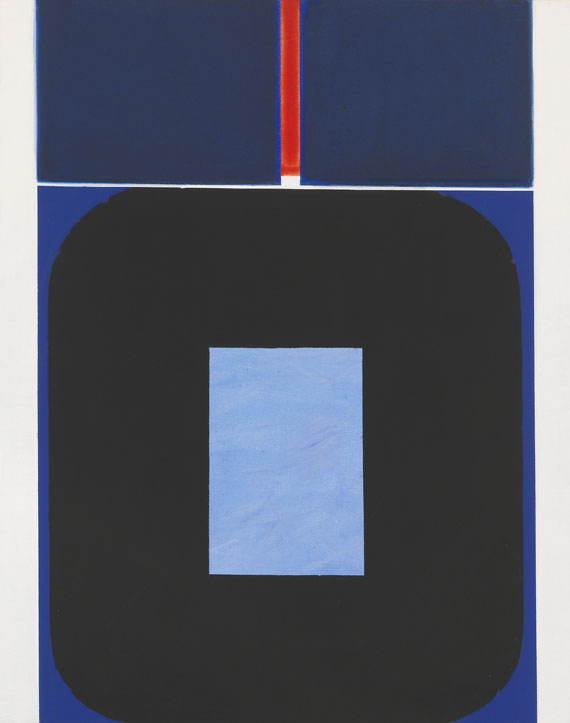 EXHIBITION: Große Kunstausstellung Munich 1964, cat. no. 822 (with typographic label on stretcher, there with date, title and inscription).

After a year at the Nürnberg Akademie der Bildenden Künste in 1948/49, Pfahler transferred in 1950 to the Stuttgart Academy, which he attended until 1954. Although he had hitherto worked primarily in ceramics, as a freelance artist he concentrated on painting. Following the early 'Metropolitan' pictures, Pfahler began about 1956 to develop pictorial configurations in which he experimented with the spatial effects of color in a manner recalling the pointilliste technique. This phase gave way to works which, from 1956, were orientated towards Action Painting and Informel. The term 'formativ[-e]', which Pfahler appended to the titles of his pictures from 1958, marks his emancipation as a painter from his earlier, more formless style influenced by Willi Baumeister. An intention to clarify new ways of seeing and fresh viewpoints informs the tusche drawings he now did, which were followed by collages.

With the years, his forms simplified, ultimately becoming vehicles for colors and their interrelationships. From about 1962, block-like forms turn into crisply demarcated color surfaces, a change which elevates Pfahler to the status of sole exponent of 'Hard-Edge Painting' in Germany. His breakthrough to an international reputation came with the early 1960s paintings he showed at exhibitions such as 'Signale' (1965) in Basel, 'Formen der Farbe' (1967) in Amsterdam, Stuttgart and Bern and 'Painting and Sculpture from Europe' (1968) in New York. Given his interest in the spatial effects created by the physical properties of color, it is only logical that Pfahler should have begun in 1965 with 'Farb-Raum-Objekten' and, about 1969, with 'Farbräumen' to translate his ideas into the third dimension. From 1965 he also carried out numerous architecture projects representing a major contribution to the field of art in architecture. With Thomas Lenk, Heinz Mack and Günter Uecker, Pfahler was chosen in 1970 to represent Germany at the Venice Biennale. In 1981 his work exemplified German art at the Sao Paulo Biennale. After a guest professorship at Helwan University in Cairo in 1981, he taught at the Nürnberg Akademie der Bildenden Künste from 1984 until 1992.

From 1982 Pfahler also taught at the Salzburg International Summer Academy. In 1999 he was commissioned to design the conference hall of the Council of Elders, the all-party advisory committee assisting the President of the lower house of the German parliament. The artist died, aged 75, in Emetzheim, Franconia, in January 2002. [DB].