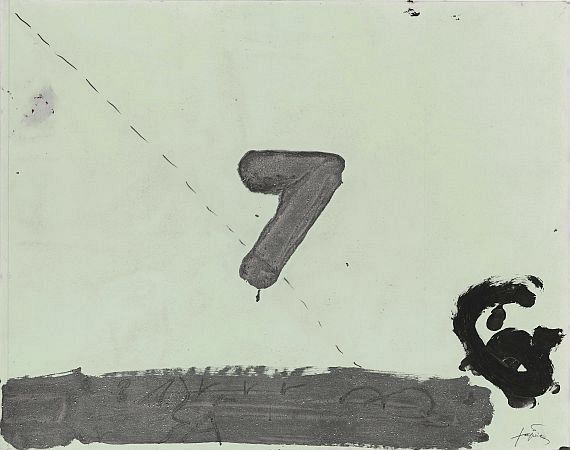 After beginning to study law, Tàpies taught himself to paint from 1946. The formative influences on his work were exerted at first by the Barcelona circle of young poets, men of letters and artists associated with the avant-garde publication 'Dau al Set', which he co-founded in 1948. Early successes with exhibitions in Barcelona made the artist eligible in 1950 for a French government scholarship enabling him to study in Paris. There he became involved with the heady intellectual scene of the day, meeting such exponents of Art Informel as Jean Fautrier and Jean Dubuffet, who were creating an entirely 'different' art based on Surrealism. Tàpies, too, thickened his painting materials, mixing sand and other substances with his oils to create rough, wall-like surfaces scored with a sparse repertoire of signs and collaged with 'poor materials'. In 1959 he executed his first lithographs. Enjoying an international reputation from the 1960s, Tàpies has been awarded numerous prizes and distinctions. His work has appeared at important exhibitions such as the Venice Biennale and documenta in Kassel.

The Museo Espanol de Arte Contemporáneo in Madrid mounted the first large-scale retrospective of his work in 1980. Revealing close links with late 'Arte Povera', Tàpies' work has remained full of enigmatic signs and abbreviations which resist decoding while recalling esoteric or magic ciphers. Widely travelled and highly educated, the artist draws on elements from a great many cultures yet his chief source of inspiration remains his native Catalonia, with his childhood memories of graffiti scrawled on Barcelona walls and the Catalan tradition of ornament based on fluid plant forms. The writings and lectures in which Tàpies inveighs against the one-sided rationale of Capitalist society and all forms of cultural interventionism reveal the artist as an outspoken critic of the modern political scene. [CB].