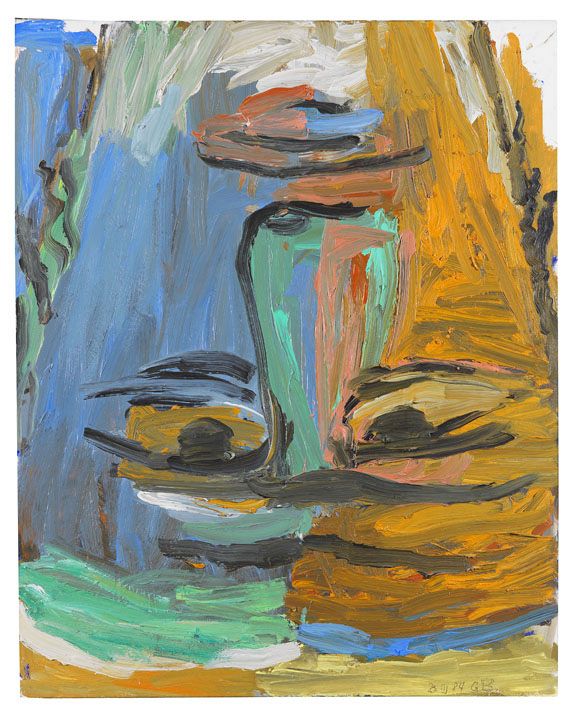 This work is registered in the Archive Georg Baselitz, Munich. We are grateful for their kind support in cataloging this lot.

Baselitz, born as Hans-Gerog Kern, borrowed his artist's name from his home town. After he had been expelled from the East-Berlin Kunsthochschule due to 'sociopolitical immaturity', he switched to the ‘Hochschule der Bildenden Künste’ in Berlin-Weißensee in 1957. Between 1957 and 1962 Baselitz continued his training at the ‘Hochschule der Bildenden Künste’ in Berlin-Charlottenburg. Hann Trier became one of his teachers. In the early 1960s he published several artistic manifestos and at the same time established a new figurative art with expressive elements, together with artists like Eugen Schönebeck or Markus Lüpertz. Baselitz wanted to openly violate fixed categories and regularities, his unpretentious painting was directed against established ideals. In 1963 the paintings 'Die große Nacht im Eimer' [The Large Night in the Bucket] and 'Der nackte Mann' [The Naked Man], which caused a scandal, were confiscated at the gallery Werner & Katz in Berlin by public prosecutor's office. The following lawsuit for pornography was closed and the works were returned. In 1969, he created the first one of his typical pictures, which presents the motif upside down. Besides painting, drawing, printing and wood sculpturing gained more and more importance. At the beginning of the 1970s the artist was well-known in Germany through numerous exhibitions. In 1977, Baselitz was called to the ‘Akademie der Bildenden Künste in Karlsruhe’. From 1983 to 1988, he continued his professorship at the Hochschule der Bildenden Künste in Berlin.

The motif of the "Abgarkopf" (Abgar Head) counts among a series of similar Abgar pictures that were also made in 1984. It was in those days that Baselitz made a number of Christian motifs. In doing so, early Christian art provided important impulse, less for its iconographic contents but for its occupation with the origin of images itself – with Christian motifs, such as the "Crucifixion" or "The Veil of Veronica". Just as it is the case with the sudarium of St. Veronica, the Abgar picture is also a "Vera Icon" – a true image of Christ. The legend of Abgar is about the healing of Abgarus V. of Edessa through a cloth with an impression of Christ’s face. The image an " acheiropoieton“, an image not created by the hand of man. In the examination of Christian image traditions, Baselitz makes an important step towards the development of the image as a type. He abandons the fundamental function of the figure and works with the picture’s entire area. Just as it is the case with this work, the head is only defined by eyes, nose and mouth, they are just reference points in a relief of green, blue and ochre colors.

In 1980, he designed the German pavilion for the Venice Biennale, exhibited at the documenta VII and had countless exhibitions and retrospectives in major international art forums, e.g. at the Guggenheim Museum in New York in 1995. In 2004 Baselitz received the 'Nobel Prize for Arts', the 'Praemium Imperiale' of the Japan Art Association. The committee justified the award of the world's highest prize for contemporary art by pointing out that for decades, Georg Baselitz has formed the international art scene with his powerful painting. [SM]. 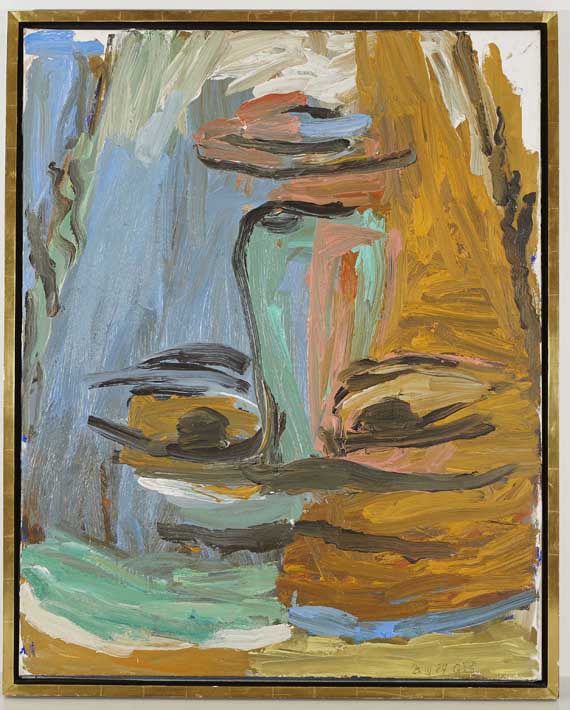