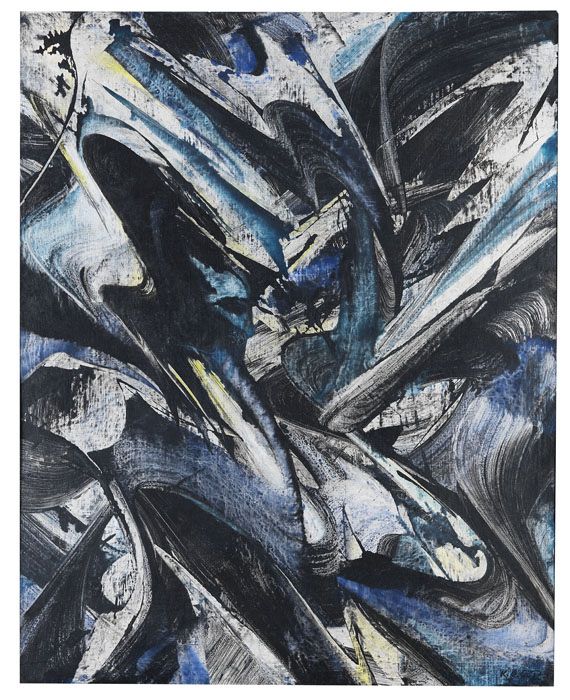 The large informal paintings from the late 1950s are among the artist's most popular works.
We are grateful to Joachim Lissmann, K.O. Götz and Rissa Foundation for the kind expert advice. The work will be included into the forthcoming catalog raisonné of K.O. Götz, compiled by 'Stiftung Informelle Kunst' and the 'K.O. Götz und Rissa-Stiftung'.

Karl Otto Götz was born in Aachen on 22 February 1914. He started painting when he went to secondary school in 1924. In 1930 he began to create abstract paintings, shortly afterwards he experimented with collages. He had to give up his second passion soar when painting became difficult for him due to the National Socialist's take-over. Götz got by selling landscape paintings to tourists, but was banned from painting and exhibiting due to his abstract splash paintings and surrealistic works. Götz was drafted, but was able to study further, to meet with colleagues and to make important connections. At the end of the war Götz, who was mainly based in Norway, got off lightly when an English acquaintance answered for him. His early works went up in flames in Dresden. In December 1945 he married his friend Anneli Brauckmeyer. During the late 1940s abstract compositions, surealistic photo-experiments and abstract-figurative monotypes were executed. He abandoned figurative art altogether in 1949 and was the first German to join the COBRA group.

After co-founding the Frankfurt 'Quadriga', an artist group representing a type of Tachism influenced by Wols and Automatism, his work changed drastically in 1952: the forms, which until now had still been well-defined, were replaced by a new, more dynamic style in a special raking technique which the artist still uses. Hence he became one of the main representatives of the German Informel. Dark paint is applied to the light priming with a brush in three swift worksteps, it is then worked over with a coating knife. The characteristic opaque surface effect of Götz's painting is achieved by the artist applying glue to the carrier before the painting process. In a final step the work is sealed with slightly liquid bee wax or a varnish. This work is a prime example of German infomal art, particularly for its format, its composition and the intensity achieved by the colors blue, yellow and black.

Götz was a co-publisher of the magazine 'Meta' from 1948 to 1953 and taught as a professor at the Kunstakademie in Düsseldorf between 1959 and 1979. Götz has been living and working in Wolfenacker in the Westerwald since 1975. Karl Otto Götz is one of the most important members of the German Informel and soon enjoyed international recognition, for example at the documenta II in 1959. During the two decades in which the artist taught at the Kunstakademie in Düsseldorf Götz influenced artist personalities as diverse as HA Schult, Sigmar Polke and Gerhard Richter. [JS]