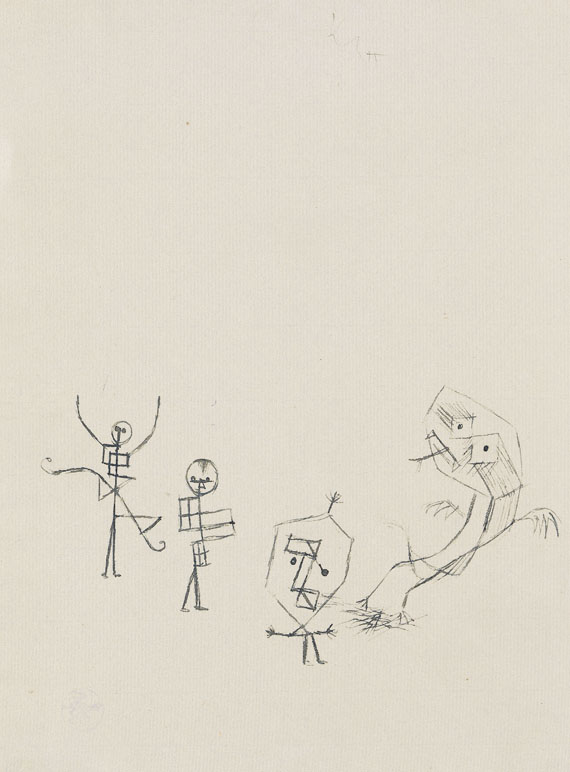 Paul Klee was born in Münchenbuchsee near Bern on 18 December 1879. In 1898 he decided to move to Munich, where he studied etching and drawing under Heinrich Knirr. Two years later Klee began to study painting at the Munich Art Academy under Franz von Stuck. His first travels took the painter to Rome in 1901/02 and, in 1905, to Paris. Participating in 1908 in the exhibitions mounted by the Munich and Berlin Secessions, Klee met Wassily Kandinsky, Franz Marc and Hans Arp, who would exert the formative influences on his work. Taking part in the second 'Blauer Reiter' exhibition in 1912, Klee met more distinguished contemporaries, such as the artist Alexej von Jawlensky, the poet Rainer Maria Rilke and the writer and composer Herwart Walden. The following year Klee showed work at the First German Herbstsalon. At that time he also did his first watercolors. From 1914 he increasingly devoted himself to working in this medium, most notably during the trip he took to Tunisia with August Macke and Louis René Moilliet. After a two years' stay there, Klee returned to Germany, where he was invited in 1920 by Walter Gropius to teach at the Bauhaus in Weimar. There he worked at first as a Formmeister (Master of Design) and later taught in the free-form painting class. In the years that followed the artist exhibited increasingly both in Germany and abroad: in 1924 he showed work in New York

In 1925 he took part in the first group show of 'painture surréaliste' in Paris, where he shared the honours with Max Ernst, Joan Miró, Pablo Picasso et al. The following year he founded the 'blaue Vier' group together with Kandinsky, Lyonel Feininger and Jawlensky. By then Klee was painting chiefly constructive and absolute pictures. Friendship with Kandinsky and his wife as well as trips to Paris, England and Egypt were a welcome change from teaching at the Bauhaus, an activity which came to restrict the artist's creative powers.

An appointment as professor at the Düsseldorfer Academy in 1930 released Klee from his contract with the Bauhaus. Three years later, however, pressure from the National Socialists brought about Klee's dismissal from the Düsseldorf Academy and he moved to Bern. In 1937 the National Socialists removed 102 works by Klee from German museums and that same year 17 of his works were shown at the notorious exhibition of 'Degenerate Art'. This was the period of the Beam-Stroke pictures and the tragic, demonic figurations which indicate Klee's premonitions of death. Not long after the Zurich Kunsthaus devoted a one-man retrospective to him, Paul Klee died at Muralto (Ticino) on 29 June 1940. [KD]. 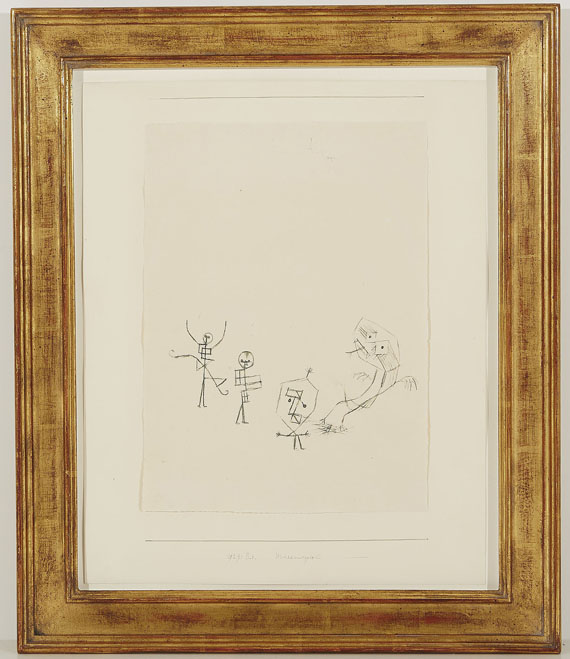