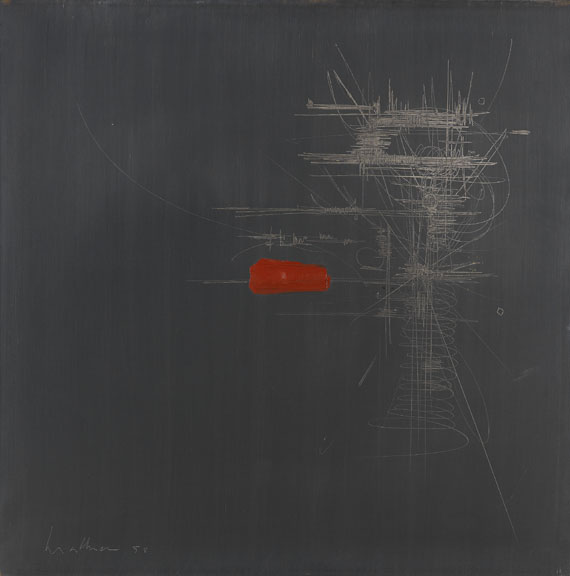 We are grateful to Jean-Marie Cusinberche for his kind support in cataloging this lot.

Georges Mathieu was born at Boulogne-sur-Mer (Pas-de-Calais) in 1921. He began studying philosophy and literature but switched at the age of twenty-one to painting. Georges Mathieu's early works are realistic landscapes and portraits predating the gradual development of a highly individualistic, expressive abstract style.
In 1947 Georges Mathieu and the painter Camille Bryen organized an exhibition of Tachist works. Mathieu also described that style as "non-figuration psychique" ("psychic non-figuration") or more particularly as "abstraction lyrique" ("lyrical abstraction"): the works were not bound by tradition and conventional rules of form. By 1951 Mathieu had organized several group shows and was one of the first artists in Europe to point out the importance of the American Abstract Expressionists. Georges Mathieu regarded the American painter Jackson Pollock, with his spontaneous, gestural style of painting, as the most important painter of that school. Georges Mathieu is a leading exponent of French Informel alongside Jean Fautrier and Jean Dubuffet.

In 1954 Georges Mathieu started staging the painting of his pictures, which are in large formats, as artistic Action. In 1956, for instance, Mathieu completed a painting measuring 4 x 12 meters (13 x 39 ft) in 30 minutes, using 800 tubes of paint, before an audience of 2000 at the Théâtre Sarah-Bernhardt. At such Actions, which have close affinities with both Happenings and Action painting, Mathieu produced decoratively linear paintings reminiscent of calligraphy. As an artist Georges Mathieu received international acclaim; his works were shown from the early 1950s at special exhibitions in both Paris and New York. Mathieu participated in numerous group shows worldwide. In 1959 works of Mathieu's were shown at documenta II in Kassel. In the early 1960s George Mathieu sculpted but also produced designs for furniture, tapestries and murals: After his essay "Au-delà du Tachisme" was published in 1963 and followed by other theoretical writings, Georges Mathieu also made a name for himself as an art theorist. [KP]. 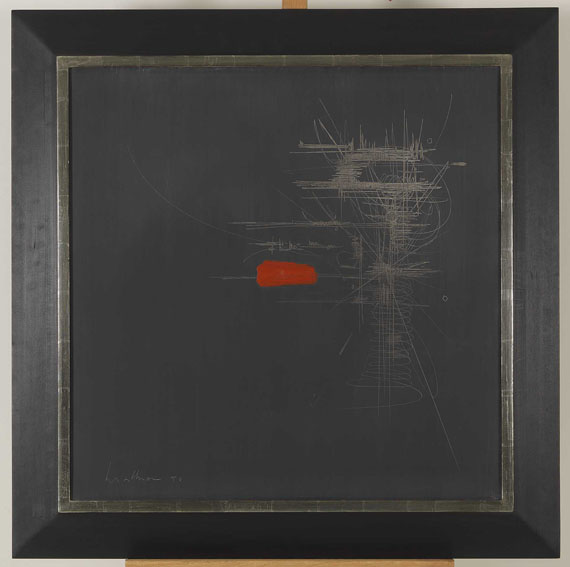