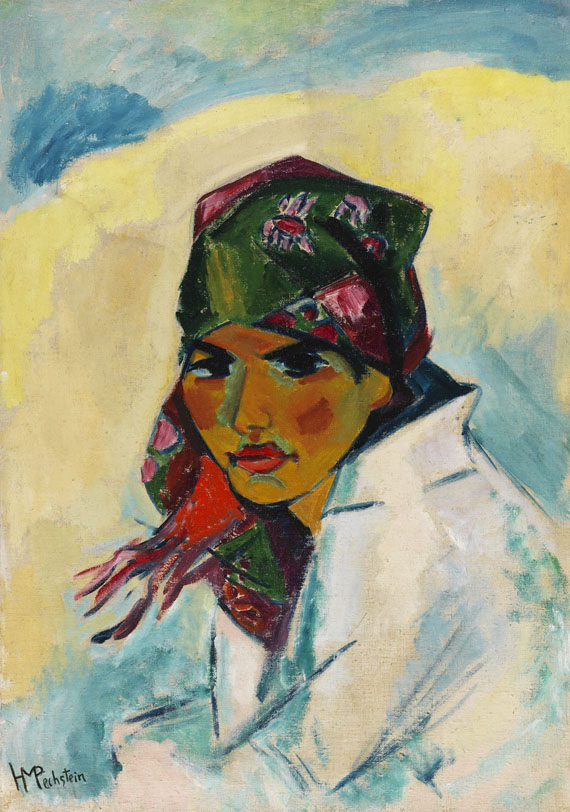 Max Pechstein's artistic talent was discovered and encouraged at a very early age. His conventional career, first as an apprentice with a Zwickau painting master, then at the Dresden Kunstgewerbeschule and finally at the Dresden Akademie under the decorative painter Otto Gußmann, provided Pechstein with a sound craftsmanship. His ceiling painting at the Dresden Arts and Crafts Exhibition in 1906, with such an unconventional color scheme that the organisers had it sprayed with grey paint to soften the colors, attracted Erich Heckel's attention. He then invited Pechstein to join the artist group ,Die Brücke' which had been founded the year before in opposition to Impressionism. The group's aim was to "attract all revolutionary and restless forces" (Schmidt-Rottluff) and an emphasis of the power of color in painting. In this environment Pechstein's Expressionist style developed further, concentrating on elaborating the focal point of the painting with a sparse painting technique. Pechstein moved to Berlin in 1908 and became a co-founder of the ,Neue Sezession'. He painted figures, still lifes and landscapes in a moderately Expressionist style. Perhaps it was this, which lead to the artist's early and continuing success.

Seeking for a nude model that suits his ideas, Max Pechstein metCharlotte Kaprolat in 1909. She became his preferred model and later his wife. Her voluptuous female body is the epitome of a sensuality that painters sought to interpret at the turn of the century. Max Pechstein follows a perspective common in his surrounding circle of artist, even though he shows his own ideas and employs his very means. The fresh conception of the portrait "Lotte mit Kopftuch" is presumably owed to the spontaneous execution, which allows a very immediate impression. A common feature of many paintings byMax Pechstein. Portraits are normally the result of several sessions, essential for capturing the depicted persons personality. Thanks to the closeness between painter and the partner as modelMax Pechstein was able to capture the moment, which makes for this composition's suggestive optical appeal. The young woman's slightly exotic facial features are lifted to spheres ofsensual immediacy through the casually draped headscarf. This, in return, is sharply defined by the white blouse and the amorphouscoloring of the undefined background. Far from an effigy-like late Impressionism, which Max Liebermann did with quite some economic success, and contrary to the abstract tendencies of those days,Pechstein created a kind of elementaryexpression that is unmatched in terms of sharp characterization and optical brilliance.

From 1945 Pechstein taught at the Berlin Akademie der Künste. Before that time, during the Third Reich, he was slandered as a "degenerate" artist. Apart from paintings his oeuvre includes more than 850 woodcuts, lithographs and engravings. [KD]. 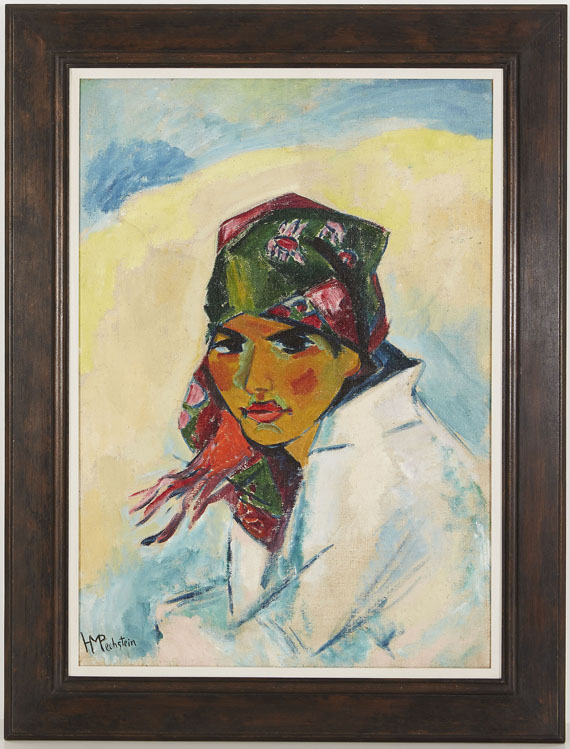