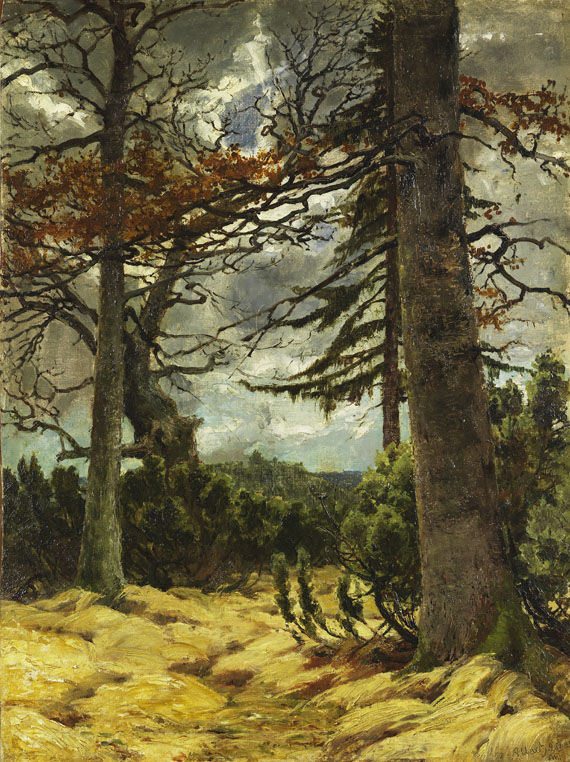 Born in Munich in 1880, Franz Marc began to study theology and philosophy at Munich University in 1899. In 1900 Marc switched to the Munich Art Academy, where his teachers were Gabriel von Hackl and Wilhelm von Diez.

Still in the tradition of realistic painting of the late nineteenth century, this landscape study of the area around Munich, which is one of the earliest paintings of the artist, already hints at what let his later work appear so fascinating ly new and unusual. Only the dramatic cloud formation, albeit concealed, is an indication of what will distinguish Franz Marc‘s later works from these early works. The painterly poise and a love for the detail that we find in this early work, are the basis for the development of a work that resulted in one of the most important in German art of the first half of the 20th century, leaving a lasting impact on the creation of almost the entire generation of artists is his time.

During a trip to Paris in 1903, Franz Marc was particularly taken with Impressionist painting. After this trip Marc dropped out of the academy and worked for some years in Munich. In 1907 Marc married the painter Maria Schür, a single mother with a child, but by 1908 the marriage had ended in divorce and Marc entered on a liaison with Maria Franck, whom he did not marry until 1913. Influenced by van Gogh's work, Marc became interested in the inner being of the animals which were his favourite motifs. Marc's first exhibition took place in 1910 at Brakl's modern art gallery, with the support of Bernhard Koehler, his patron. That same year the 'Neue Künstlervereinigung München' mounted its second exhibition, which was roundly criticised. Marc's review caused him to be taken into Wassily Kandinsky's circle. However, the group was so fraught with internal tensions that 'Der Blaue Reiter' was formed. In addition to an exhibition by the 'Neue Künstlervereinigung München' ('NKVM'), the Thannhauser Gallery mounted an exibition in 1911 devoted to 'Der Blaue Reiter', which toured Germany, being shown at Cologne, Berlin, Bremen, Hagen and Frankfurt. In 1912 the second 'NKVM' was held and, in parallel, the second 'Blauer Reiter' show featured prints and the circle of artists exhibiting work was enlarged to include 'Die Brücke' with Paul Klee and the Russian artists Malevich, Goncharova and Larionov. That same year the 'Almanach Der Blaue Reiter' was published by Marc and Kandinsky. Franz Marc's style changed following a trip he took to Paris with August Macke in autumn 1912, where they visited Delaunay. Impressed by Delaunay's window pictures, Marc began to break down his pictorial forms prismatically and to use more pure color and contrasts. He incorporated representations of animals in these refracted pictorial forms as the vehicles for symbolism. Marc was by now far on his way to abstraction yet the figurative symbolic animal forms continued to recur because to him they meant spiritual purity and redemption. Marc did his well-known painting 'Tirol' (1914) while under the spell of a trip to the South Tyrol (1913) with Maria Marc. In summer 1914 Marc painted his most important works, 'Der Turm der Blauen Pferde' and 'Tierschicksale'. In them Marc has achieved a pictorial idiom that is entirely and distinctively his own through his use of animal symbolism although the influence of the French avant-garde is evident. That year Marc planned to produce an illustrated Bible in collaboration with Kandinsky, Kubin, Klee, Heckel and Kokoschka. Marc volunteered when the first world war broke out and was sent to France. He fell at Verdun on 4 March 1916. Franz Marc's last work is his 'Skizzenbuch aus dem Felde' ['Sketchbook from the Battlefield']. [KD].