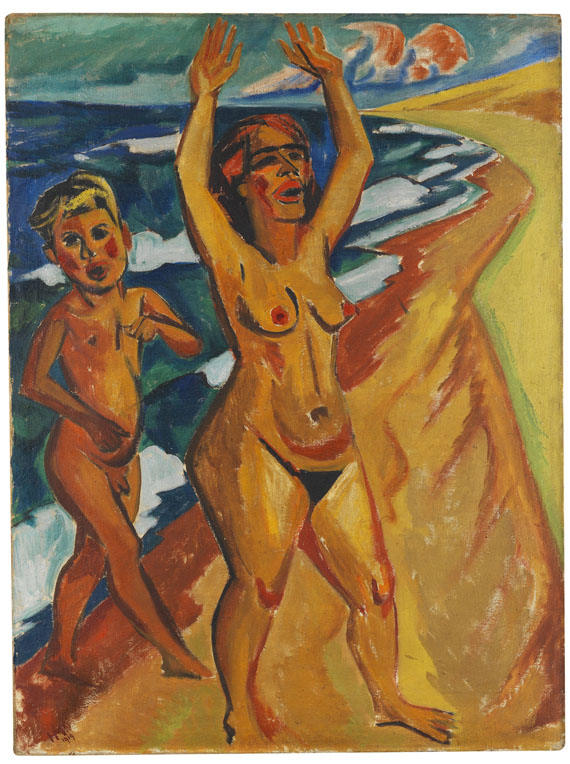 PROVENANCE: Galerie Gurlitt, Berlin (until 1923, on sale or return).
Dr. Walter und Maria Schmitt, Neuss/Bad Godesberg (presumably acquired from the artist in the 1920s/30s).
Private collection Germany (since 2003 as loan in Kunstmuseum Bonn).

"Finally summer again, I am all free and can be in my beloved Nidda, working and refilling energy, like the moss soaked with rain, turning the forest into a miracle. I am inebriated, work, sea, wife- child-, I am chewing the air and I feel like breaking the brush with joy of creation. I am grateful to god for my life and I am grateful to my friends for enabling me to a life full of painting and drawing and without other worries." (From a letter by Max Pechsteins toGeorg Biermann, written in Niddaon6 August, 1919. Quote after: Georg Biermann, Max Pechstein (= Junge Kunst, vol. 1), Leipzig 1920, p. 16). With these words that burst with joy of life and happiness, Max Pechstein expresses the deep elation the stays in Nidda gave him. Pechstein visited the town on the Curonian spit for the fourth time in 1919, in the little fishing village he sought pure nature and nativenees. Here in Nidda, where he stayed for the first time in 1909, the arttist made his most striking works, works that show man and nature in harmony.

After two further summers spent in Nidda, in 1911 and in 1912, it took seven years until Pechstein returned again after World War I in 1919. From June to October he created a large number of works there. For a series of beach pictures in strong colors he chose to depict his wife Lotte and his son Frank, born in 1913. Our work "Schrei am Meer" in particularly energetic colors is part of this series. The color field painting, executed in edgy and partly expressivejagged manner with strong contours dominates this composition as main element. The bodies' easy nudity is an expression of a liberation from constraints that Pechstein sought not only in Nidda. It was the same liberation he felt during his stays at the Moritzburg Lakes with Heckel and Kirchner or on his journey to the South Sea island of Palau in1914. Strong, beautiful and self-assured, with striking gesture and facial expression is how Pechstein presentsLotte as central figure in the painting, little Frank at her side, boldly looking right at the observer. Lotte's "Schrei am Meer" is directed at an imaginaryperson whose identity remains obscure. Interestingly, the story comes full circle, as the painting on rear presumably is a fragment of the painting"Figur in den Dünen", made in Nidda during previous summers, and a motif that can be seen in connection with the works made in Nidda in1912.

In 1939 Pechstein stayed in Nidda for the last time, he was shocked by the development. The once so picturesque village had become a tourist resort, all nativeness had vanished (on Pechstein's stays in Nidda and the works made there cf. Aya Soika, Max Pechstein in Nidden, in: ex. cat. Max Pechstein. Ein Expressionist aus Leidenschaft, published by Peter Thurmann et al, Munich 2010, pp. 101-109). In this context the "Schrei am Meer" is a document from Pechstein's happiest days in Nidda. [KP]. 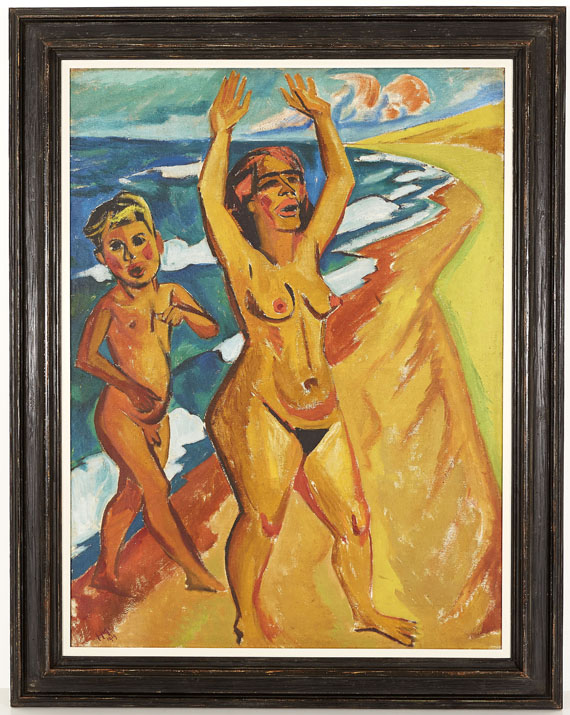