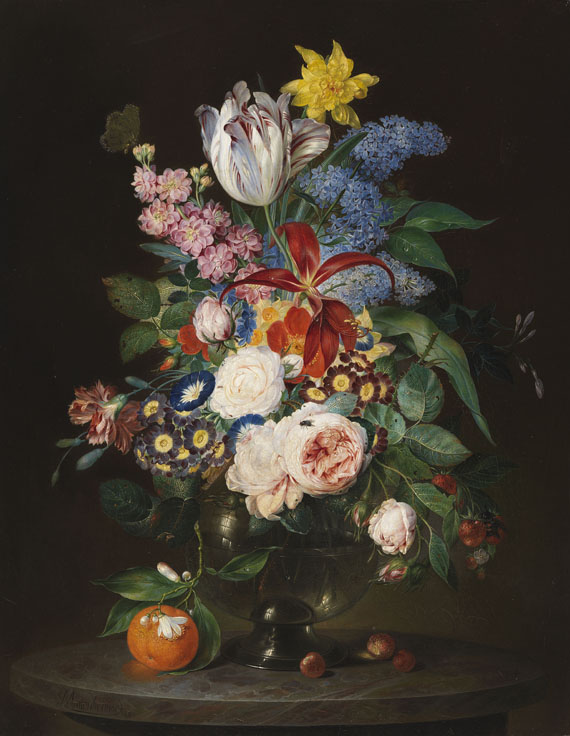 Just like his bother Karl, Theodor Mattenheimer received his first training in art from his father. In 1807 he recommended by the duchess Maria Anna in Bavaria to the king Max I. Joseph, who from then on would foster his painting. In 1817 Mattenheimer became gallery inspector in Bamberg, in 1823 he held the same post in Augsburg. Afterwards he became director of the local art and drawing school. Johann Georg von Dillis, first director of the Pinakothek, which opened in 1836, treasured Mattenheimer both for his qualities as painter as well as restorer and hired him as inspector for the Pinakothek.

Theodor Mattenheimer specialized on still lifes from an early point on. In the early 19\up5 th century he was among the pioneers of a genre that had clearly lost in importance in the 18\up5 th century. Especially in Southern Germany Mattenheimer played an important role, his impact on following artist generations can be compared with that of Johann Wilhelm Preyer for the Düsseldorf School. Mattenheimer trained his individual style with the paintings of renownend Dutch still life artists, especially with works by Jan van Huysums, which he studied in the Munich gallery. Based in the Netherlands and Flanders, the genre had reached its peak in Europe in the days of the baroque era. Numerous schools developed, artist’s specialized on various subjects, such as the significant Vanitas still life or somewhat more profane book and smoker still lifes. In the wake of the genre’s rediscovery in the early 19\up5 th century artists like Mattenheimer and Preyer are less concerned with the symbolic content of the depicted objects a it was the case in the 17\up5 th century, they were much more focussed on the extremely precise techniques of the Dutch and their balanced compositions. [CB].

More Information
+
Sell
Get a free appraisal for a similar object!
+
Register for
Theodor Mattenheimer
+
Buying from A-Z
+
Contact a specialist
Share