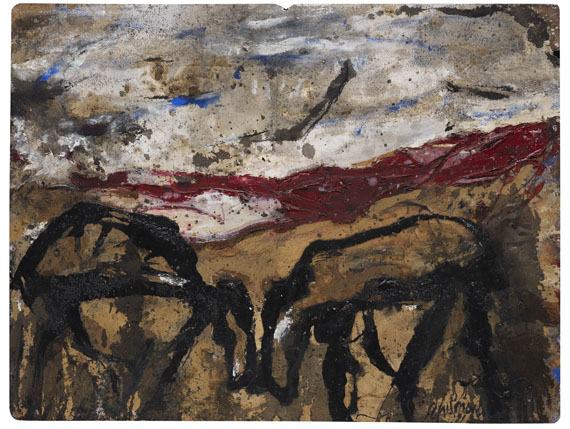 We are grateful to Dr. Ulrich Schumacher, Emil Schumacher Foundation Hagen, for their expert advice. This work is registered in the foundation's archive under the number 0/680 and will be included into the forthcoming catalog raisonné.

By means of a maximum emphasis on the consistency of color and ground, Schumacher manages to break up two-dimensionality of the classic panel painting: The pastose paint forms slabs, drags streaks or accumulates islands and thus turns the image surface into eruptive color constructions. With this painting "Terrano XV" the artist stimulates associations and overcomes the contrast between figuration and abstraction, by means of the symbolic black forms that break through the expressive color relief and call reminiscence of stone-age cave paintings. This way Schumacher pulls the observer right into his the spell of his archaic-impulsive images.

His latest works of the 1990s, with figurative reminiscences, have clearly overcome the contrast between abstraction and the figurative. Schumacher became internationally known and praised around the middle of the 1950s as one of the most important artists of the Informel. He was awarded numerous international prizes, of which the Guggenheim Award in New York in 1958 was only the beginning. He was appointed professor at the Hochschule für Bildende Künste in Hamburg in the same year, accepted a post as professor in Karlsruhe in 1966 and taught as a guest professor at the university in Minneapolis/USA in 1967 for one year. The Deutscher Bundestag honoured him in 1998 by commissioning a mural for the Reichstag building in Berlin. Emil Schumacher died in San José on 4 October 1999, one year after the large retrospective exhibition in Munich. [KH].