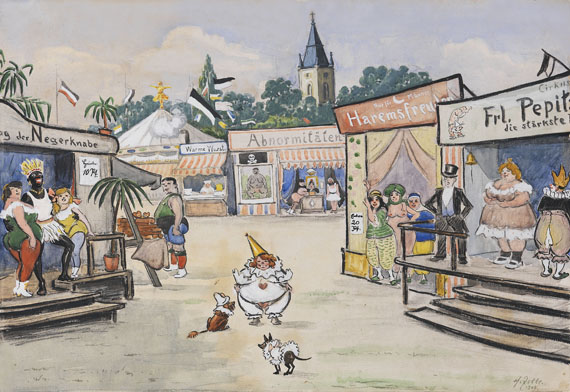 We are grateful to Detlev Rosenbach, Hanover, for his kind support in cataloging this lot.

Heinrich Zille was born at Radeburg near Dresden in 1858. His father was Johann Zille, a watchmaker and blacksmith. Theodor Hosemann, the classical master of Old Berlin painting and illustration, exerted a lasting influence on Zille's work. From 1877 Zille worked at the 'Photographische Gesellschaft', a graphic arts workshop that produced mainly commercial and trivial art. His first lithograph dates from that year. He began to do drawings notable for the social criticism they expressed. In the early 1890s Zille began to work seriously as a craftsman and artist, continuing to draw prolifically and sporadically working on a series of etchings on a wide variety of subjects. From 1894 he photographed the Berlin street scene, at popular festivals and in the studios of artists who were his friends. Joining the avant-garde art scene in Berlin, Zille met many distinguished artists, including Max Liebermann, August Gaul and Käthe Kollwitz. In 1901 Zille participated in his first group show, 'Zeichnende Künste', mounted by the Berlin Secession and from then on showed work regularly with the Secession. A year later he had his first one-man show. As Liebermann's protégé, Zille became a member of the Berlin Secession in 1903. Zille now worked mainly on drawings for satirical journals such as 'Simplicissimus', 'Die Lustigen Blätter', 'Jugend' and 'Ulk'. Numerous portfolios of his drawings were issued, including 'Zwölf Künstlerdrucke' with heliogravures after drawings and etchings, which soon earned him the reputation of being the best draughtsman of his generation in Germany. After being dismissed from the 'Photographische Gesellschaft' in 1907, Zille freelanced. His prints, notable for meticulous workmanship and consummate mastery of technique, were at first executed mainly for private purposes. Not until 1907 did Zille begin to make prints from old plates to be sold by art dealers and worked on sequences of prints such as 'Zwanglose Geschichten und Bilder' ['Free and Easy Stories and Pictures'] and 'Landpartie' ['Excursion to the Country'].

Zille used watercolors only in works from his earlier years, later on just from time to time, he avoids colors, is happy with sketches and drawings in pencil, charcoal or chalk easily made off the cuff. With great knowledge of human nature he captures scenes in his "Miljöh" (milieu) and puts a suitable comment below them, making a combination of line and word that hardly any other artist in his days was able to render with such great poise. Not only the depictions of working class surroundings with gallows humor, but also their "Amüsemang" (Pastimes) are in his focus. Circus shows, public baths or, as it is the case with this sheet, the fair, show that Zille managed to see the bright side of life despite all shortcomings.

In 1924 Zille was made a regular member of the Prussian Academy of the Arts and appointed professor. A retrospective, 'Zilles Werdegang' ['Zille's Career'], was mounted by the Märkisches Museum in Berlin, which later acquired one hundred works by Zille, to honour the artist on his seventieth birthday. Zille died in 1929 and was buried in Stahnsdorfer Friedhof near Potsdam. Work by Zille is owned by public and private collections throughout the world. Since 2002 the Heinrich Zille Museum in Berlin has been a fitting permanent home for the œuvre of 'this man, who is the purest incarnation of Berlin' (Kurt Tucholsky). [DB].