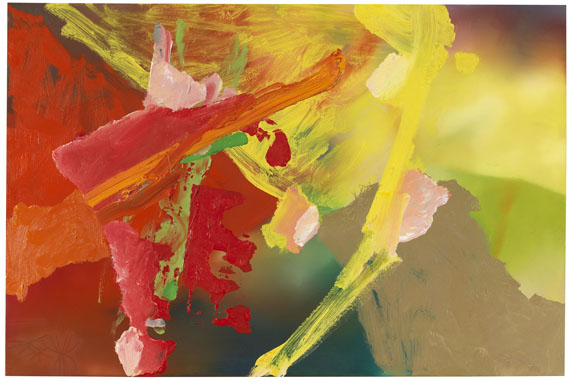 We are grateful to Herrn Dietmar Elger, Archive Gerhard Richter, for his expert advice.

After his studies of painting in Dresden from 1951 to 1956 and the three years that followed as a master-class student at the Academy, Richter emigrated to the Federal Republic of Germany. A large cache of early work, long believed to have been lost, dates from that period. Only a few of these works have survived. From 1961 to 1963 he studied under Karl Otto Götz at the Duesseldorf Academy of Arts. In 1962, influenced by Giacometti and Dubuffet, he started with representational paintings based on photographs. This was the result of a changed view on art, which, according to Richter, "has nothing to do with painting, composition or color". His first solo exhibitions took place in 1964 at the galleries of Heiner Friedrich in Munich and Alfred Schmela in Duesseldorf. In 1971 he was offered a chair at the Academy of Arts in Duesseldorf, which he held until 1996. Richter‘s work is both heterogeneous as well as fascinating, as the different abstract work periods deliver proof of: In the mid 1960s he made his first abstract "Farbtafeln" (Color Plates), a principle the artist took up again in work series in the 1970s, works in which he facetted the four primary colors in incidental combinations. In his monochrome "Gray-Pictures” (1970) Richter eventually declared the absolute painter’s means paint and stroke of the brush the central issues in his art.

After his gray pictures, which marked the end of all figuration and were, according to Richter the " [..] only possible reaction to indifference, lack of opinion, refusal to make a statement and shapelessness" (transl. Of quote after: Heribert Heere, Gerhard Richter - Die Abstrakten Bilder. Zur Frage des Inhalts, preface ex. cat. Kunsthalle Bielefeld and Mannheimer Kunstverein e.V. 1982, p. 9), the artist turned to the "Abstract Pictures" as of 1976 and moved forward to a fulminant formal recommencement. With a great virtuosity Gerhard Richter created a work complex that counts among the highlights in his oeuvre. As far as methods are concerned, Richter takes on previously gained experience, creating paintings such as the one offered in our auction in a uncompromising radicalness and artistic expression, which is particularly captivating for its strong and spirited coloring. What is of additional importance is the fact that this painting is one of the three preliminary paintings for the monumental three-piece work "Faust" (1980, cf. catalog raisonné of paintings 460).

Despite the focus on abstraction, Richter time and again reverts to figuration. An important auxiliary means is the so-called "Atlas", a kind of systematically organized image file, that he showed on Documenta X in Kassel in 1997. Today Gerhard Richter counts among the most successful contemporary artists. On a regular basis his art sets new records on the international auction market and is in the focus of much celebrated exhibited, such as the spectacular retrospective "Panorama" (Tate Modern, London 2011/12and Neue Nationalgalerie, Berlin and the Centre Pompidou, Paris 2012). [KP].