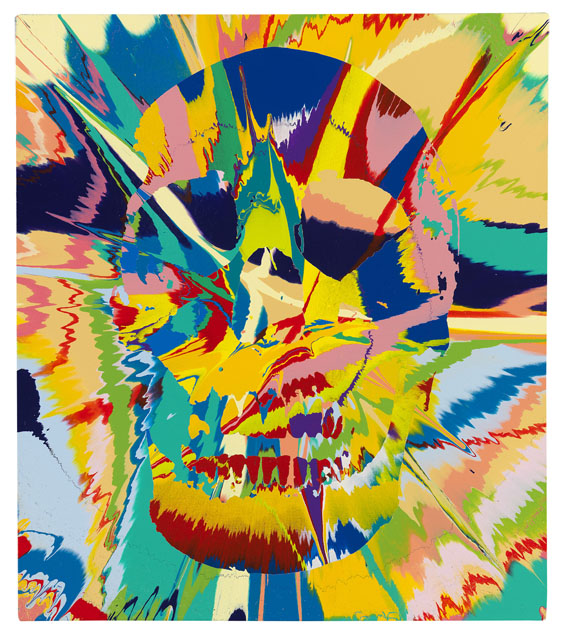 In 1965 Damien Hirst was born in Bristol. He attended the Goldsmith College in London from 1986 to 1989 to study the only course of Fine Art that dealt with different genres. The first time Hirst, and some of his fellow students, attracted attention was as early as in 1988 with their exhibition "Freeze" which they presented in an empty warehouse in the dock area of London. In this exhibition Charles Saatchi, the famous art collector and advertising tycoon , recognized Hirst's talent and started to regularly present Hirst's works in his exhibition "Young British Artists". Saatchi became Hirst's most important sponsor. In 1990 Damien Hirst continued to show his artworks in single exhibitions in the Woodstock Street Gallery in London, the Institute of Contemporary Art (London) and the Emmanuel Perrotin Gallery in Paris. Hirst received a nomination for the renowned Turner Prize for his work 'The Physical Impossibility of Death in the Mind of Someone Living', a 14-feet long shark in formaldehyde in a vitrine. In 1994 another formaldehyde installation called 'Away from the Flock' showing a sheep in a tank caused a scandal with a disgruntled visitor pouring black ink into it. The controversy about the British artist reached its peak when Hirst received the Turner Prize in 1994 for his animal installations. At the same time these installations achieved premium prices on the art market. However, as early as 2 years later the public started to lose its interest in the artist with the tendency to self-aggrandizement. Hirst began experimenting with other areas, in 1996 he presented his first short movie "Hanging Around", he opened a restaurant and produced pop songs. In 1996 Damien Hirst published his biography at the age of 33.

This painting, which belongs to a number of works with titles starting on "Beautiful", seems jolly and colorful at first sight. Only upon a second look can the observer make out the contours of a human skull amidst this color explosion. With this both morbid as well as aesthetically appealing composition, Damien Hirst created a modern memento mori and remembers that death is an inevitable part of life, even though we tend to ignore that: "I feel death is an important issue for today’s artists, because people ignore and deny it, but you just can‘t. I think that looking death in the face will make life better." (Damien Hirst in an interview with Konstanze Thümmel, transl. Of quote after: Künstler. Kritisches Lexikon der Gegenwartskunst, edition 53, issue 2, p. 15).

Damien Hirst is one of the most important contemporary artists. He lives and works in Devon. [KH].