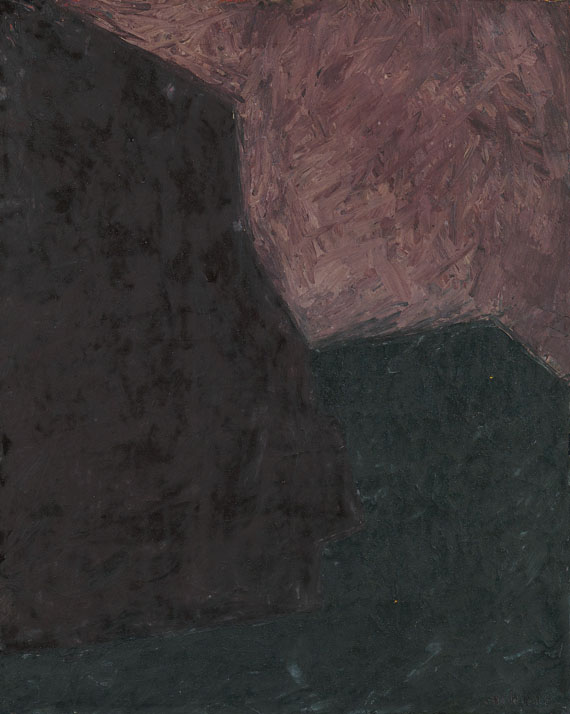 This work is registered under the number 960047 in the Poliakoff archive.

The Russian painter Serge Poliakoff, born in Moscow on 8 January 1900, is one of the most important members of the Ecole de Paris. He fled the Russian Revolution in 1917, first going to Constantinople and then to Paris in 1923, where he spent most years of his life. He began studying painting while earning a living as a musician. He enrolled at the Académie Forchot and Académie de la Grande Chaumière in Paris 1929 and went to London in 1935 where he studied at the Slade School of Art. At first he produced variations of academic traditions and predominantly figurative motifs such as nudes, houses, trees etc. After 1935 Poliakoff increasingly turned towards abstract art, employing color as color without any figurative context. A decisive influence in this direction was Kandinsky, whom he met after his return to Paris. Sonia and Robert Delaunay taught him to appreciate the emotive quality of color and awakened an interest in simultaneous contrasts. Another important source of Poliakoff's pictorial language was the sculptor Otto Freundlich with his curved color-form compositions.

As aforementioned, Serge Poliakoff, along with Jean Dubuffet, Pierre Soulages, Jean Fautrier and others, belongs among the main representatives of an artist circle which made history as the "Nouvelle École de Paris". However, the name is misleading, as "Nouvelle École de Paris" was not a school or stylistic tendency in a narrow sense, but rather the development of abstract painting in Paris after World War II, all the way into the early 1960s. Poliakoff worked out a very own form of abstract painting by putting color fields side by side. This atmospherically dense painting in a reduced coloring marks the peak of his artistic development, that was not only groundbreaking in terms of form, additionally, it also captured art’s zeitgeist. With unmeasurable creative powers Poliakoff enables us to discover abstract painting over and over: "Many people say there is nothing to see in abstract painting. If you ask me, I could live my life over and over again, and still wouldn`t be able to express everything I have seen." (Serge Poliakoff, transl. of quote after: Künstler. Kritisches Lexikon der Gegenwartskunst, edition 31, issue 21, III 1995, p. 2).

Poliakoff's paintings were shown at international exhibitions during the 1950s and 1960s, after his nationalisation in France in 1962 the artist received his own room at the Biennale in Venice. Over the later years a number of lithographs, to which Poliakoff attended since 1962, as well as small format paintings were created, when the artist had to take care of himself after a heart attack in 1965. Serge Poliakoff died in Paris on 12 October 1969. [KP].