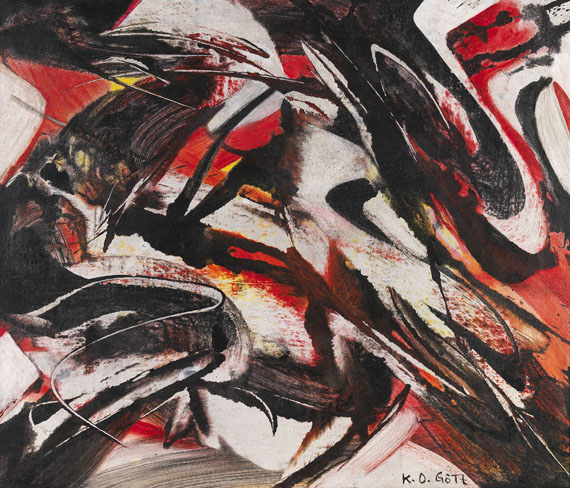 Karl Otto Götz was born in Aachen on 22 February 1914. He started painting when he went to secondary school in 1924. In 1930 he began to create abstract paintings, shortly afterwards he experimented with collages. He had to give up his second passion soar when painting became difficult for him due to the National Socialist's take-over. Götz got by selling landscape paintings to tourists, but was banned from painting and exhibiting due to his abstract splash paintings and surrealistic works. Götz was drafted, but was able to study further, to meet with colleagues and to make important connections. At the end of the war Götz, who was mainly based in Norway, got off lightly when an English acquaintance answered for him. His early works went up in flames in Dresden. In December 1945 he married his friend Anneli Brauckmeyer. During the late 1940s abstract compositions, surealistic photo-experiments and abstract-figurative monotypes were executed. He abandoned figurative art altogether in 1949 and was the first German to join the COBRA group. After co-founding the Frankfurt 'Quadriga', an artist group representing a type of Tachism influenced by Wols and Automatism, his work changed drastically in 1952: the forms, which until now had still been well-defined, were replaced by a new, more dynamic style in a special raking technique which the artist still uses. Each work is prepared over a long period in an art theoretic process - a gradual development of the image, which is often reflected in numerous sketches and gouaches produced over a number of years. There are three fast working processes: first the artist applies dark paint onto a light background with a paintbrush, then he partly removes this paint again with a 'rake', a type of spatula. Finally he softens the harsh contrast between light and dark areas with a dry paintbrush. His early metamorphosis-like style, which awakens associations with insects and birds, changed during the 1950s to a more metaphorical language with a harmony between color and rhythm.

The gestural and spontaneous painting process, to which Karl Otto Götz, a main representative of German Informel, was obliged throughout his life, is all in line with the discovery of new painting techniques, which the artist described as follows: "When I was mixing glue for my son in summer 1952, I coincidentally came across my fast painting technique: First glue on paper, then the gouache in it, and that’s it – the picture is done [..] The step from cardboard (gouache) to canvas was self-incidental. In winter 1952/53 I found the technique and conception, that would determine my picture’s structure from that point on [..]" (transl. of quote after: H. Zimmermann, in: ex. cat. Staatliche Kunstsammlungen Dresden et al, 1994, p. 12). In combination with the squeegee technique, which Götz had brought to perfection, for which liquid paint is applied to the primed image carrier, and then treated in the following step, the artist’s characteristic style results. In our work, this is expressivity and dominance is even more increased by adding the color red.

He taught as a professor at the Kunstakademie in Düsseldorf between 1959 and 1979. Götz has been living and working in Wolfenacker in the Westerwald since 1975. Karl Otto Götz is one of the most important members of the German Informel and soon enjoyed international recognition, for example at the documenta II in 1959. During the two decades in which the artist taught at the Kunstakademie in Düsseldorf Götz influenced artist personalities as diverse as HA Schult, Sigmar Polke and Gerhard Richter. [KP].