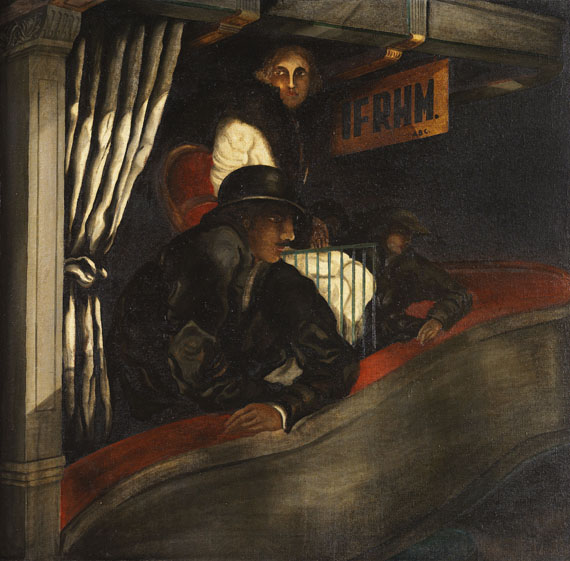 Franz Radziwill was born on 6 February 1895 and studied architecture in Bremen until 1915. He was introduced to artist circles in Fischerhude and Worpswede by his teacher Karl Schwally, where Radziwill met Bernhard Hoetger, Otto Modersohn, Heinrich Vogeler and Clara Rilke-Westhoff. He also studied works by Van Gogh, Cézanne and Chagall. After returning from a British prisoner-of-war camp in 1919 Radziwill settled in Berlin for a couple of years where he joined the 'Freie Secession' and the 'Novembergruppe'. He moved to Dangast on the North Sea in 1923.

Two pictures in one: Two important works by Franz Radziwill have been preserved by the felicitous reuse of a canvas that had already been painted. On the one hand, the painting shows a group of people, typical for Radziwill, in half-light in a theater box. The woman in a fair dress is flanked by two men in dark suits and sits clearly elevated. What is striking about this triangular composition is the woman‘s line of sight, which clearly disturbs the harmony of this traditional composition and breaks up the narrative character. Instead of following the performance on the stage like the two men, she looks at the observer and makes him part of the scene. The second scene on the canvas shows “Dangast vom Meer aus“ and is one of Radziwill’s typical landscapes, in which the demonical possession overlaps the seemingly trivial concept of a landscape composition. Radziwill‘s mastery in painting the night by day has given all his landscapes a very own character. What is calculated composition for Magritte, seems self-evident for Radziwill. Overlain by a tremendous loneliness, increased by the single person, this landscape is like a landscape of a soul shaped by destroyed hopes. Formal analogies to Caspar David Friedrich‘s "Mönch am Meer" can be observed, however, his work is more about the romantic aspect of loneliness. Franz Radziwill interprets his landscape more directly, in order to conceive it in his own way, peculiar, mystical and yet full of a magic force.

In the mid 1920s he developed a friendship with Otto Dix, who introduced him to 'New Objectivity' circles. Radziwill was much praised when he took over Paul Klee's chair at the Düsseldorf Akademie in 1933. The Nazis forced him to resign two years later, however, and banned him from practicing his profession. He fought in the war a second time from 1939 to 1945 and then returned to his house in Dangast, where he began painting still lives and landscapes which would dominate his work until his death in 1983. [KD].