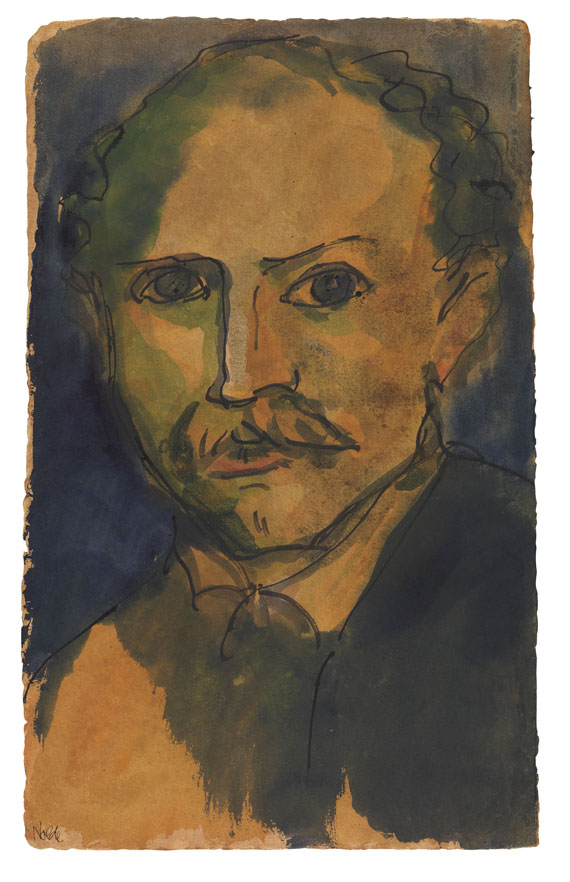 Emil Hansen was born near the German-Danish border on 7 August 1867. He adopted the name of his birth town as his artist name at a later date. Nolde completed an apprenticeship as a furniture designer and wood carver in Flensburg between 1884 and 1888 and then worked for various furniture factories in Munich, Karlsruhe and Berlin. He was employed as a teacher of industrial drawing at the Gewerbemuseum (Industrial Museum) in St. Gallen in 1892, where he taught until 1898. There, where at first mainly landscape watercolors and drawings of mountain farmers emerged, Nolde became known through small colored drawings of Swiss mountains. Nolde finally moved to Munich after deciding to become a painter, but the academy under Franz von Stuck dismissed him. He joined Adolf Hölzel in Dachau in 1899 to become his pupil and went to Paris in 1900 to increase his knowledge at the Académie Julien. Nolde studied the Neo-Impressionists Vincent van Gogh, Edvard Munch and James Ensor, which, around 1905, gradually led him away from his early Romantic Naturalism and to the discovery of his own style with a strong emphasis on color, colorful and glowing flower pictures came into existence. During a sojourn in Alsen in 1906 Nolde met the painters of 'Die Brücke', a group he joined briefly in the same year. A series of portrait studies marked the artists discovery of the watercolor. Nolde's first attempts in 1909 at painting in this technique on non-absorbent paper, leaving large areas of the paper uncovered and dispensing with contours, were quite revolutionary. After a dispute with Max Liebermann, Nolde was excluded from the 'Berliner Sezession' and founded together with other dismissed artists the 'Neue Sezession' in 1910 and participated in their exhibition until 1912.

This unusual impressive self portrait of Emil Nolde is part of a series of self portraits the artist created over his long life as an artist. Exploring the self has a long tradition in western art, dating back to the sixteenth century and the emancipation of the painter as artist and creator of his works. In the grand Albrecht Dürer exhibition in Nuremberg in 2012, the importance of the self portrait as one of the most important components in the artist’s creation was clearly stressed. From Rembrandt all the way to the artists of Classic Modernism, the self portraits are incredible documents of the artistic examination of the self. Nolde sees himself in frontal perspective and filling the entire sheet. Every addition has been avoided, in order to draw the observer’s attention to the essentials. The exploring, somewhat over-sized eyes make for a suggestive effect that the portrait emanates.

Less fascinated by the city-life of Berlin, which he recorded in expressionistic pictures, than by primitivism, Nolde painted still lives with exotic figures and mask pictures. He returned from an expedition to New Guinea in 1913 with lots of study material, which he worked up in numerous works until 1915. Since 1916, he spent his summers on the island Föhr and settled in Seebüll in 1928. The garden in Seebüll became an unfailing source of inspiration for his painting, but also coast areas and religious became his primary sujets. Defamed during the war and banned from exhibiting his works since 1941, Nolde spent the years 1939 to 1945 in Seebüll painting his 'unpainted paintings', more than 1000 small watercolors, which he took on in his oil paintings after 1945. In his last years, primarily watercolors with flower and landscape motifs from the neighbourhood of his house in Seebüll, where Nolde died on 13 April 1956, came into existence. [KD].