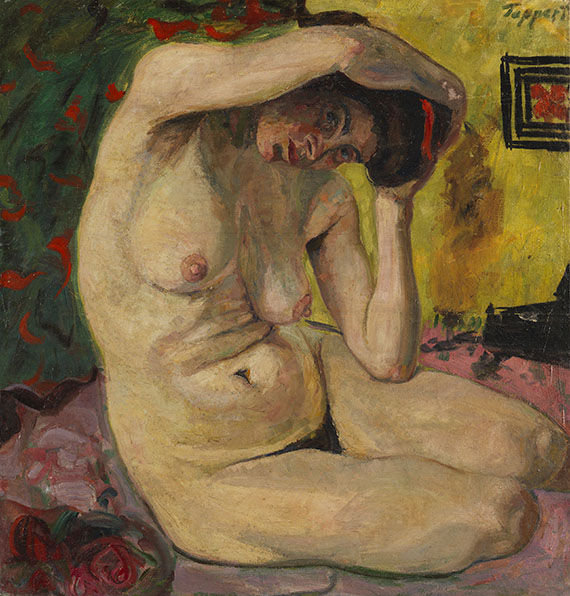 Tappert's expressive illustrations of female nudes are among the artist's most sought-after motifs on the international auction market.

Georg Tappert discovered fine art after an apprenticeship as a tailor and two years spent working for different tailor's businesses, when Max Liebermann, the president of the 'Berliner Secession' acknowledged that he "possessed a talent which was worth developing". The young Tappert went to the Academy in Karlsruhe in 1900 , in 1903 to work as Paul Schultze-Naumburg's assistant he missed the liberal atmosphere of the Karlsruhe Akademie. Tappert joined the 'Deutscher Künstlerbund' when it was founded in 1904 by merging all the German Secession groups. The artist's early works from this period are influenced by Gauguin, Cézanne and Munch. Before moving to Worpswede in 1906 he spent one year in Berlin as an independent painter and graphic artist, exhibiting his works in his first one-man exhibition at Paul Cassirer's gallery. In Worpswede, where he met Paula Modersohn-Becker, Tappert founded his own art school in 1907. One of this school's most famous pupils was Wilhelm Morgner. When Tappert moved back to Berlin in 1909, he exhibited works at the association's exhibitions. He continued teaching art together with Moritz Melzer at the newly founded 'Schule für freie und angewandte Kunst' (School of fine and applied arts).

In line with contemporary taste, the massive female body was a popular subject of German art at the beginning of the 20\up5 th century. Artist of Late-Impressionism, most of all Lovis Corinth, rendered ample homage to it. Georg Tappert, who was particularly fond of voluptuous female bodies, realized his idea of the female body examplarily in this work. The nude crouched into a square and the model’s entwined posture contribute to an optical effect that could not have been more concentrated. Fundamental academic rules still determine what is happening, however, just like his contemporaries, Tappert soon abandoned them. Despite all realism of style, the crouched nude emanates an aura of worldly joy in nice bodies, which, in line with the then prevailing liking, is shown in an immaculate richness.

The rejection of works by 27 artists - including Georg Tappert - submitted to the 20th 'Sezession' exhibition led to the foundation of the 'Neue Sezession 1910' and its first exhibition in May. Tappert was the first chairman of this association, which was presided over by Max Pechstein. The association's survival until 1914 is largely owed to Tappert's commitment in this function. In 1918, the foundation of the 'Novembergruppe' was an important step in Tappert's artistic development. Tappert enthusiastically supported the group's call for new art forms and a very close intermingling of art and the ordinary population. Hitler's rise to success meant a long period of ostracism for the artist. He was dismissed from his teaching post in 1937 and banned from any artistic work, forcing him into an inner emigration. In 1945, at the age of 65, Tappert dedicated his time to the reconstruction of the Hochschule für Kunsterziehung.Georg Tappert died in Berlin in 1957.