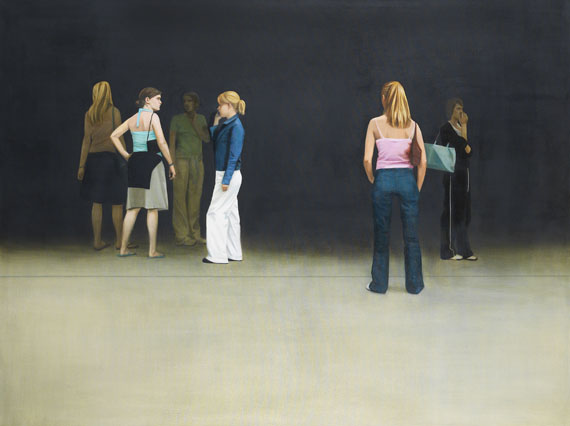 Tim Eitel, born in Leonberg in 1971, counts among the much-celebrated newcomers of the second generation of the New Leipzig School. As a representative of the LIGA group around Christian Ehrentraut he gained international recognition. Eitel began humanist studies at the Stuttgart University in 1993, before studied art at the Burg Giebichenstein in Halle as of 1994 and as of 1997 he chose painting at the Leipzig School of Visual Arts. From 2001 to 2003 he was student in the master class of Arno Rink. In 2002 Eitel participated in the international program at the artist house Bethanien in Berlin and received a scholarship from the state of Saxony. In 2003 the artist was awarded the Marion-Ermer-Prize.

Photographs served Tim Eitel as basis for his ultra-realistic works, with photographic accuracy he puts the protagonists of his pictures onto the canvas. Placed in anonymous locations or abstract landscapes, they look like incidentally cast figures on a game board. Their aimless forsakenness captivates the observer at first sight and has a both contemplative as well as unsettling effect. With great poise the artist interweaves image space and figures, abstraction and figuration and thus creates a dense atmosphere. It is just this atmosphere that is conveyed in "Nacht", in its reduced clearness and melancholy it is an impressive document of the artist’s mastery.

Since 2000 Eitel has shown his works in many exhibitions of renowned galleries and museums, e.g. the Galerie LIGA, Berlin, the Galerie Eigen+Art, Leipzig, the ‘Museum der bildenden Künste‘, Leipzig, the State gallery Stuttgart and the Sommer Contemporary Art Gallery in Tel Aviv. [JH].