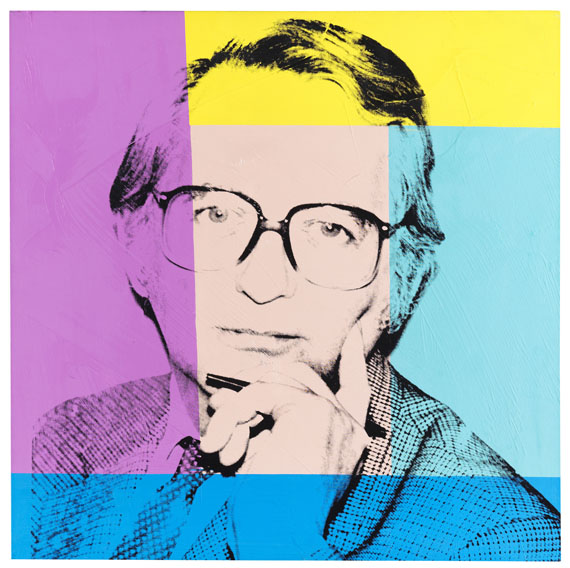 The artist, whose original name was Andy Warhola, began studying design in 1945 at the Carnegie Institute of Technology in Pittsburgh. He moved to New York in 1949 and soon became a successful advertising artist. Around the middle of the 1950s the artist began making his shoe drawings, the details of which are supposed to represent typical features of famous personalities. Warhol began making his comic-strip figures, such as Batman, Dick Tracy and Superman at the beginning of the 1960s, which were soon followed by his first portraits of Elvis and Marilyn as well as "Disaster", his "Do it Yourself" pictures and the Campbell's soup cans as icons of the American world of consumption. These silk-screen prints were exhibited in 1962 in the New York Stable Gallery and soon led to the artist's comet-like rise to fame. The artificiality of the consumer world became the artistic motto of Warhol and his assistants, who worked and lived together in the "Factory", Warhol's studio. This was where he produced his series covering the entire range of every-day-life and triviality, such as Coca Cola bottles or Dollar notes. Towards the end of the 1960s Warhol began concentrating on films, the theatre and multimedia happenings with the band "The Velvet Underground" - to him merely an extension of the painting medium. He also founded the journal "Interview". Warhol survived an attempted assassination by Valerie Solanas in 1968 in which he was shot and severely wounded. Warhol returned to painting as a medium in the 1970s and then collaborated with Jean-Michel Basquiat and Francesco Clemente and produced the TV program "Andy Warhol Television".

In the 1970s Warhol once again turned to panel painting. Just as it was the case with his graphic work. Portraits also were his preferred subjects for canvases. In the typical Pop-Art manner he made numerous portraits, among others by Jackie Kennedy, Mick Jagger or Joseph Beuys. This portrait shows Karl Ludwig Schweisfurth, the former owner of the meat factory ‘Herta‘. "He was no common slaughterhouse owner: Karl Ludwig Schweisfurth showed his art collection right in his factory. Butchers were doing their job looking at portraits by Andy Warhol" (transl. Quote after vanity fair, October 2007, p. 84). Andy Warhol was quite impressed after a visit at Karl Ludwig Schweisfurth, as he put it in his diary (cf. ‘Das Buch der Tagebücher‘: selected by Rainer Wieland, Munich 2010, p. 83). In 1984 Karl Ludwig Schweisfurth finally sold his factory and went to Upper Bavaria to produce organic food on a farm. Today the ‘Herrmannsdorfer Landwerkstätten‘ are a model company for species-appropriate stock breeding and sustainable farming.

During his last years Warhol supported other artists like Keith Haring or Robert Mapplethorpe. After his death, his hometown Pittsburgh in Pennsylvania opened the 'Andy Warhol Museum' in his honor. [KP].